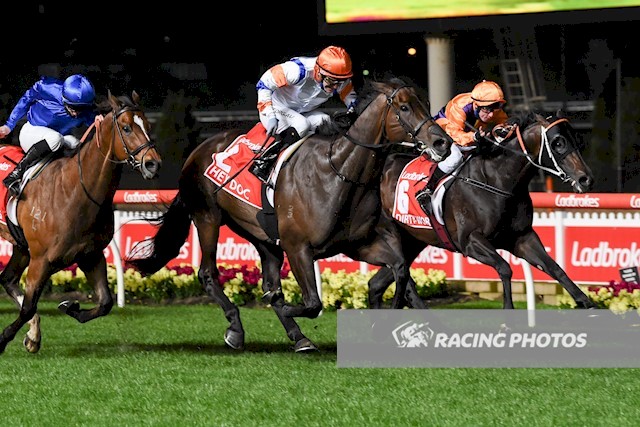 Hey Doc won the Manikato Stakes as a four-year-old in 2017, now in 2020, came back as a seven-year-old to again demonstrate his sprinting ability running a track record of 1:08.77, to take 0.01 off the previous best set by Runson last year.

For trainers Tony & Calvin McEvoy it was the culmination of a plan when the gelding returned to racing in September after a break with a minor injury.

Hey Doc, backed from $12 into $10 was given the run of the race by Luke Currie in scoring a three-quarter length win from Trekking ($3.60 fav) with Dirty Work ($6) a short neck away third.

The gelding flew out but couldn’t cross to the inside, so jockey Luke Currie sensibly opted to sit behind the quick speed set by Pippie and Bella Vella.

Currie pulled Hey Doc out to challenge turning for home and the courageous sprinter did best to win his second Manikato.

Trainer Calvin McEvoy said he was “bloody emotional” after the win.

“What a great old horse, he’s just been a pin up horse for our stable,” McEvoy said.

“For Luke to have a bit of a scare on Wednesday and come out and do that, and Camille, his regular rider had a tumble off a young one yesterday – it was just a big team effort.

“Camille has been riding him every day he’s been in work for the last few years.

“When I went up to her when she was on the ground after the fall and looked to be in a lot of pain, she said she wasn’t crying because of the pain but because she couldn’t lead up Doc.

“We have targeted this race, and he needed those couple of runs because he is a bigger, older horse now.

“Even Tuesday morning we brought him here and gave him a good bit of work and he was a bit casual on his own and had a bit of a puff, but we knew it would clean him up perfectly.

“It was unbelievable to pull it off.

“I wish the owners were here, but they have been very patient through his whole career.

“He’s had a couple of setbacks and when he came back and won the Winterbottom off injury that was a special moment but for him to win to win this, his fourth Group One – not many horses win four Group Ones – it is a very special moment.”

Winning jockey Luke Currie was overjoyed to come back with another Group One win on Hey Doc.

“He puts himself on the speed and tries his heart out, he just brings it every time he comes to the races.

“I thought the way to track was playing and drawn where we were, our advantage was probably to be bang outside lead.

“Bella Vella was very fast, so I just decided it was better to come back off the pace because they were going so quick.

“I landed on my head and neck in a barrier mishap on Wednesday – in exactly the same spot that I had just come back from.

“I’d like to thank everyone that helped me out there and in the hospital in Geelong and my physio Andrew Wilson – I keep backing up to go and see him and he got me to the races today.

“I’ve been lucky to get support, especially from Tony McEvoy and Calvin.”

Hey Doc now has the amazing record of 10 wins and five placings from 28 starts collecting $3,071,800 in stakes after being purchased for just $85,000 by McEvoy Mitchell Racing at the 2015 Melbourne Premier Yearling Sale.