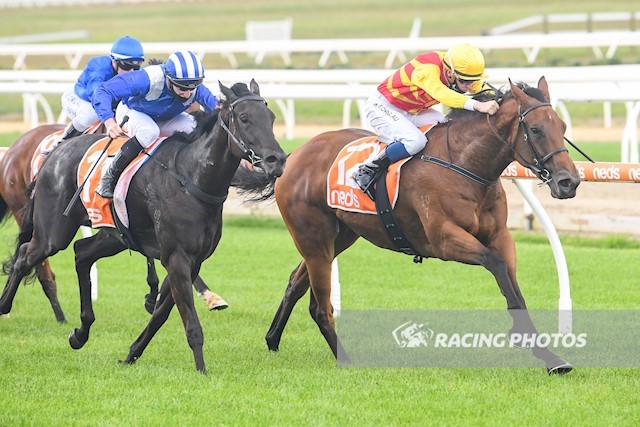 Talented three-year-old filly Violinist made a successful return to racing at Mornington on Monday, October 19.

Although the filly only had a head to spare in winning the Modetch Maiden (1200m), trainer Calvin McEvoy said she was a horse to follow.

Ridden by Michael Dee, Violinist, the $1.60 favourite, went to the lead soon after the start and held on to win from Manaajim ($3.60) with Transpolar ($5), two lengths away third.

McEvoy, who trains in partnership with his father Tony, said the stable had high hopes for Violinist.

“Actually, we pushed her to make today’s race,” McEvoy said.

“We think she is a stakes-class filly and needed to get her racing to reach the targets we have in mind.

“There is no doubt she went into today’s race a couple of gallops short, so while maybe she didn’t look impressive to some, we were delighted.

“I spoke to Mick (Michael Dee) and he said the filly was starting to feel her lack of racing on the home turn.

“He kept at her hands and heels up the straight to help her to the line and she was able to win.”

McEvoy said the stable had thrown the filly into tough races, right from the start.

“We ran her in the Breeders Stakes and Sires Produce Stakes in Adelaide for her first two starts and she was good enough to run second in the latter to be stakes-placed.

“Following today’s victory, we will now look to another black type race for her next start.”