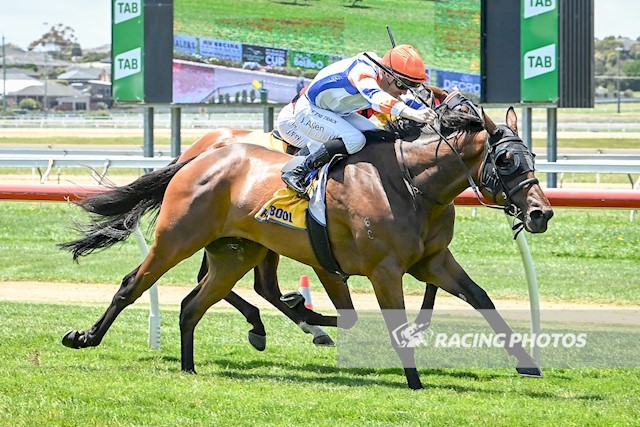 Dining out on Tuki Twelve

The first starter, by Pierro, was trapped three wide in running and ran into a strong wind up the home straight but was still good enough to win the McCarthy Big Screen Hire Maiden.

The gelding was caught three wide after the start but Allen allowed him to get into rhythm midfield before letting him to stride up to the leader coming off the back straight.

Allen was forced to switch the whip to the left hand to keep him straight but Tuki Twelve was good enough to win.

“I didn’t enjoy watching it much early,” McEvoy said.

“Credit to the horse, we have poured a good amount of work in him.

“Thank you to the Heinrich family for their patience. It has been a long road to get him to the races and for him to win on debut is fantastic.”

McEvoy said the naming of Tuki Twelve was a funny story.

“A few months ago, there was a group of trainers in Ballarat who went out for lunch and infamously it was put in the paper we were doing something wrong.

“The journalist went off a bit early there and put us in the paper when we weren’t breaking any rules.

“The trainers and I joke about it now and we thought we would name this nice horse after that.

“He’s got a good constitution this horse and handles the work.

“He walks out onto the track in the morning nice and quiet but bounces back in and this tells me he wants more and more.

“I think he will really enjoy stepping up in trip, he’s had a good hit out there and we can probably step up to 2000 (metres) now.

“Not many horses can do what he did, three wide no cover, and it’s a bit windy but he got the job done.”

“It was a good training effort by Calvin and the team,” Allen said.

“A bit of pressure on them for this horse to perform after the way they named him.

“He’s a big strong horse and we didn’t have the best of luck early, we just got posted a bit wide.

“He relaxed well and got into a good rhythm.

“We travelled well to the home turn, but it was quite a strong wind up the home straight, so he had to be pretty tough.

“For a horse having his first start, he had a good look around, but he was too strong.”