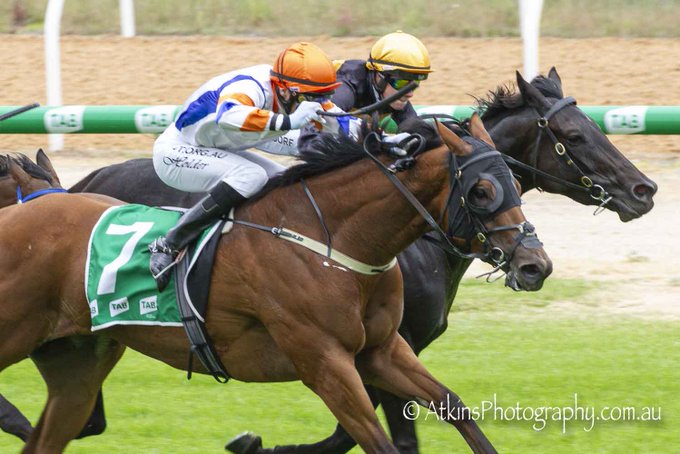 There is always a bit of rivalry between trainers Tony & Calvin McEvoy and Fountain Of Youth proved Dad right again after the filly won at Murray Bridge.

The win gave the McEvoys two consecutive winners after the victory by Huayu Rainbow, but it was Dad Tony who had the credit.

Fountain Of Youth ($3.20 fav), ridden by Jason Holder, also giving him a double, finished best in Magic Millions Maiden (900m) winning by a long neck from Rustle Up ($5) with Larkham ($8.50) a similar margin away third.

I thought the 900 metres might be a bit sharp for her but Dad she would win – and he was right,” McEvoy said.

“It is always great to come to Murray Bridge; it is always presented in good condition by John Buhagiar.

“This little girl has been working quite well and trialling up nicely.

“I was unsure about the 900m, but the co-trainer was very sure about it, so he showed his brilliance there again.

“It was good to turn the tables on Sam Burford who had the winner when this filly ran second at her first start.

“It was a good ride by Stubby who let the speed go and was quite patient.

“The leader went very fast, but our filly knuckled down late to get the win.”

“She’s a naturally athletic filly and quite a lean filly so she doesn’t need a lot of work.”

Jason Holder said the McEvoys were a good stable to ride for.

“Calvin gave me good instructions, he said don’t think it is a 900 metre race just ride how it is,” Holder said.

“It worked out well, so we didn’t want to be chasing them early.

“I was able to find a good spot which was probably a pair closer than I would have liked.

“The filly felt really good at the 300 metres mark but she had had enough on the line.”