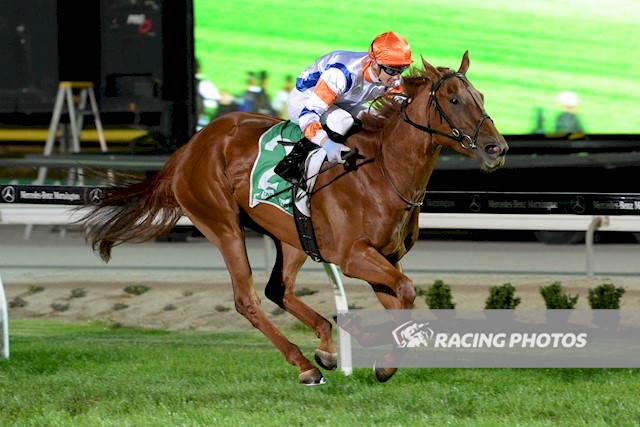 A dashing ride by Jye McNeil saw Ruler By Choice notch her fourth win from just 11 starts at Cranbourne on Friday, March 5.

He made his winning move shortly before turning for home when he took control of the race and shot her three lengths clear of the opposition.

The daughter of Choisir now has four wins and three placings from her 11 starts and took her stakes to $88,585.

The victory also gave trainers Tony & Calvin McEvoy a daily double having won at the Stawell meeting earlier in the day with Yulong Sovereign.

“She seems to take a bit of improvement from her first run,” McCarthy said.

“She had a bit of weight today (60kg), but she is a lovely, big mare and we were confident she could carry it.

“She was very strong today.

“It was an easy watch, and she settled a bit better today being second up.

“She travelled around lovely and always looked like the winner.”

“It was a good performance,” McNeil said.

“She was well placed tonight.

“The only query for me pre-race was the speed map. I thought there was a bit of speed that was going to perhaps make it hard from my barrier draw.

“But we were able to get across and get into a good rhythm straight away and I think that was key for her performance tonight.

“I could hear them getting close near the post after we had grabbed a break.

“She had a big weight to carry but I knew she would be strong at the 1300 metres, so I got them chasing me early and she was doing enough to hold on.

“This is her peak distance for now, but she has a bright future for sure.

“Confidence will do her the world of good and I’m sure the team will place her well moving forward and she’ll get her opportunity at city level for sure.”