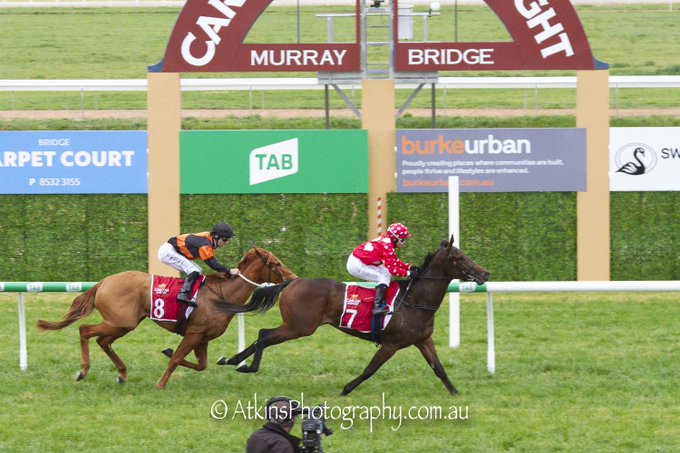 The love affair of McEvoy Mitchell Racing with the new Murray Bridge track at Gifford Hill continued on Wednesday, July 22 when first-starter Celestine proved too strong for her rivals in the Carlton Draught Maiden (900m).

The win was the stable’s 28th winner from 88 starters at the new Murray Bridge circuit which opened on July 24 last year when the McEvoy Mitchell stable had an amazing six winners from the first eight races.

The McEvoys have also placed their first starters to perfection with a 26% strike rate at the track.

Celestine began nicely and settled in the leading group to the home turn before Vorster asked her to lengthen.

The runner-up battled on well, but the filly was too strong despite wanting to hang in over the final stages.

Trainer Tony McEvoy was pleased, and relieved, by Celestine’s win.

“It was a lovely win, she was well placed today,” McEvoy said.

“She had trialled up nicely, she’s got some talent.

“She’s been a little bit temperamental and a bit immature in the brain, that is why we have been pretty patient with her.

“She showed this sort of talent in her first prep, but it was all too much for her.

“Even there today, we saw it needed all Barend’s experience to help her over the line.”

McEvoy said he had faith in Celestine’s ability to make a winning debut.

“It was just whether she was going to do it correctly.

“James has been a really good supporter of the stable.

“Being in Sydney and having horses with me down here in Adelaide is a real vote of confidence for us and it was lovely to win a race for these guys.”

“The team has done a great job getting her race ready, at the same time knowing she’s a little bit hot under saddle.

“I was happy she went down nice and calm and had a good experience today.

“She came off the bridle a little bit, but once I got into her and gave her a reminder she quickened away very quickly.

“At the same time, she started gawking at the winning post a bit and wanted to lug in a little bit.

“But this experience is going to stand her in good stead, and I think she is going forward to be a nice filly.