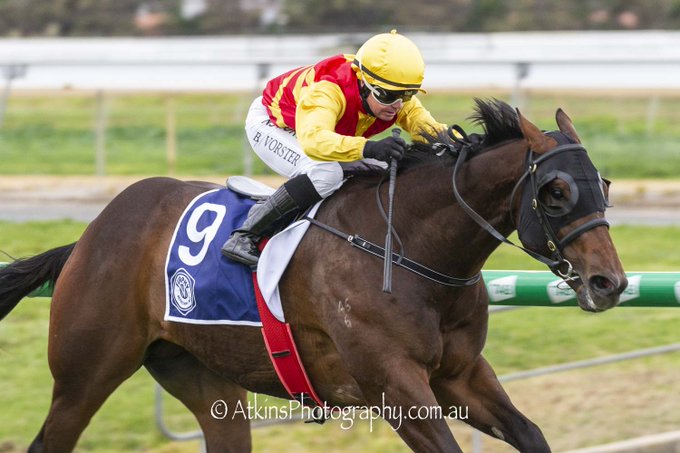 Hypersonic remained unbeaten and stamped himself as a three-year-old of quality with an easy win at Morphettville Parks on Saturday, July 18.

Trained by Tony & Calvin McEvoy and ridden by Barend Vorster, Hypersonic dashed away from his rivals to score a 1-3/4 length win in the Furphy Handicap (1000m).

After showing talent as a two-year-old but with an immature body, Hypersonic didn’t debut until July 4 and thrashed his rivals scoring by 2-1/2 lengths at Murray Bridge.

At Morphettville Parks, the gelding began fairly but kicked through to share the lead before dashing clear in the home straight to win well.

“He was really good,” McEvoy said.

“He raced a little more professionally today and made the step up to the city grade.

“He did a really good job, he’s a high talent.

“I trialled him at Doomben one day against the open sprinters as an unraced two-year-old and he toweled them up.

“He was fantastic but jarred up and we couldn’t get him to the Magic Millions.

“When they’ve got that sort of talent it is frustrating but it’s okay to wait.”

McEvoy said consideration would now be given to backing Hypersonic up in next week’s $100,000 Listed Lightning Stakes (1050m) at Morphettville.

“If he eats up and does everything right you might see him next week.

“At the back end of the year it is nice to have a little black type race, but we’ll just see – it is up to the horse – if he doesn’t do well enough, we’ll wait.”

“When you see him walking around the ring he’s a solid bloke, then when you get on him he’s even more impressive.

“He’s got real strength and muscle underneath you and he’s just a real nice type.

“Today he was on the ball and jumped and landed running.

“He was a little keen over the first couple of hundred (metres), I just gave him a little whistle and he relaxed and gave himself a nice breather and came back to me.

“I thought he might have relaxed too much but once I tightened him up, he put them to bed nice and early.

“It was a good solid win today.”