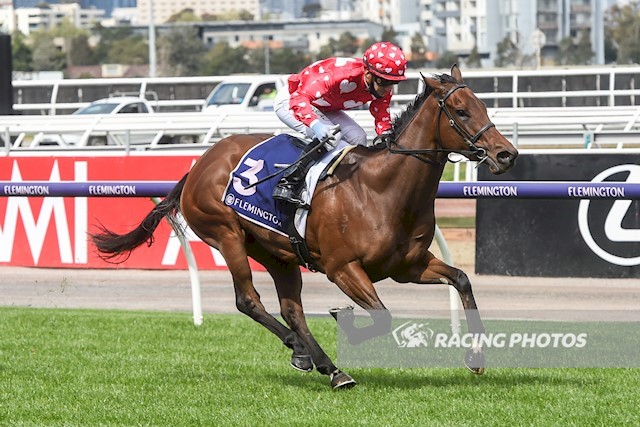 After winning at Murray Bridge on debut, the filly stepped up to Adelaide city company at Morphettville, before coming to Flemington to win in Melbourne.

The filly jumped nicely from gate two but settled midfield inside early.

Currie elected to switch Celestine inside of the Flemington straight and she accelerated to the lead and comfortably held her rivals in the run to the line.

Trainer Calvin McEvoy was most impressed by Celestine’s win and to stay unbeaten.

“It was a beautiful ride by Luke, he rode her very confidently,” McEvoy said.

“It was nice to see her take the step up to this Flemington race.

“I would like to thank our farm at Murbko back in South Australia on the River Murray.

“Nick Hill and the team up there have done a great job.

“She is very difficult to train at Flemington, this filly.

“After her last win at Morphettville she went up there for a nice freshen up and tick over.

“We’ll send her back to South Australia now, back up to the farm to keep her ticking over and we can target another race.”