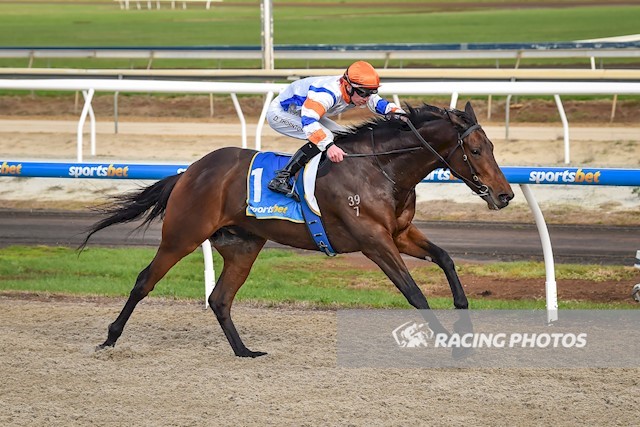 An excellent front-running ride by Damien Thornton enabled Andai Steppes to break through for a debut win on the Ballarat Synthetic on Monday, May 16.

Thornton had no hesitation taking the Tony & Calvin McEvoy-trained four-year-old to the front and allowed him to bowl along in the Polytrack Maiden (2100m).

Andai Steppes, a drifter to $9.50, maintained an advantage of no less than a length throughout the race.

Thornton gained a crucial three length break as the field turned for home and the gelding kept running to score a length win over Bodrum ($15) which emerged from the pack.

The win gave the McEvoys a double at the meeting having scored earlier with first-starter Silent Surrente.

“We actually accepted for a 2600 metre maiden here at Ballarat on the turf track on Wednesday,” McEvoy said.

“We were going to see how he handled a two-day back up, but now he won’t be running.

“He’s been a bit of handful and hasn’t really matured until now.

“He’s a proper stayer and let’s hope he can go on with it.

“At home he’s very quiet and anyone could ride him, but he got a bit excited today, maybe it was racing on the wax.

“He recently travelled over from Adelaide and had a nice gallop on the poly about a week ago.

“He’s a naturally fit horse and might be next year’s jumper.”

McEvoy said the stable now would, look for a suitable 2400 metre race.

“That is probably the way to ride him, roll along.

“I was happy to see Damien take the race up and he travelled beautifully for him.”

“He was good today,” Thornton said.

“He jumped well, and I didn’t have to do a lot to find the front.

“We wanted to make sure it wasn’t a slowly run race, so the best way was to dictate, and he was too good.

“He just stays. He wasn’t exactly quickening through the line but held his gallop.

“He is just going to be one of those genuine stayers.”

Thornton said being in front had been the place to be with so much kick back on the synthetic surface.