McEvoy Mitchell RacingLatest News All the way win for One Out 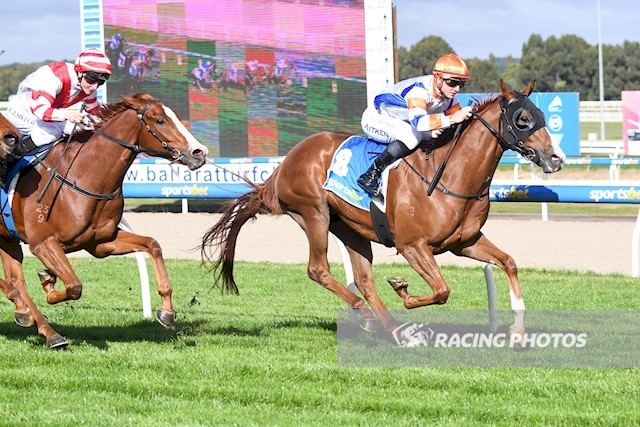 All the way win for One Out

Promising two-year-old One Out led throughout for a maiden win at Ballarat on Wednesday, May 18.

Having just his second start, the Tony & Calvin McEvoy trained gelding, controlled the tempo and proved too strong for his rivals in the Hertz Ballarat Maiden (1200m).

Aitken had ridden One Out on debut at Donald when second and noted his immaturity.

The McEvoys made several gear changes for the Ballarat event, and he raced much better.

Trainer Calvin McEvoy believes everything One Out does as a two-year-old is a bonus.

“He did a terrific job that young horse,” McEvoy said.

“We never really thought he would get to the races this early.

“But he has matured quickly, and even from his first run, where I think he chased home a pretty smart one, he’s improved again.

“Mentally, early on, he has been a bit fragile, and his full brother has won over one and a half miles, so he’s going to get better next time, and over further.

“He is a really nice type and we thought he was a value buy, and now he has got a really good group of owners who are having a good time.”

“He probably hasn’t gone straight a day in his life.

“He has been hanging out and today we added a one-eyed blinker and bubble cheeker, and it proved the right move.”

Winning jockey Mitchell Aitken was taken by One Out’s win.

“It really was an impressive win,” Aitken said.

“He just ran into a smart one the other day but got to show his dominance today.

“He improved 100 percent from his debut.

“He hung out quite bad on debut at Donald, he is very raw, it is just lucky he has got natural ability.

“With the bubble cheeker and right-side blinker, it really helped him today.”