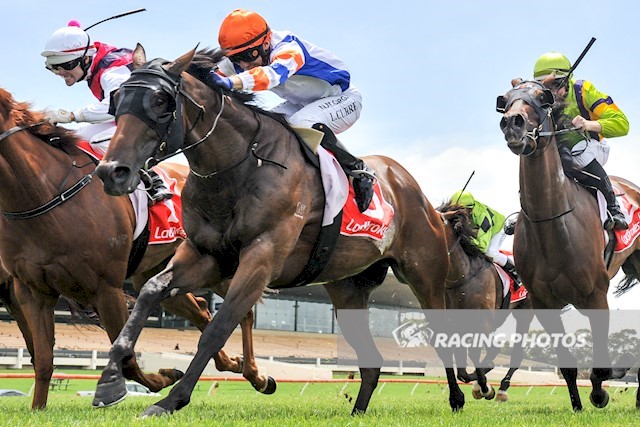 After being trapped three wide throughout, Blow Torch ($5) proved too strong for his rivals in the Ladbrokes Back Yourself Benchmark 64 Handicap (1600m) scoring by a head from Magnossiva ($7.50) with Bet Red ($2.80 fav) a long head away third.

Winning jockey Luke Currie said mid-race he thought trainers Tony & Calvin McEvoy would not have been too happy with him.

“Early I thought I would tuck in and be one-one,” Currie said.

“When he got caught where he was (three wide) I thought what Tony might be thinking.

“I could feel a few hands around my throat,” he joked.

Currie said it had been a good effort by Blow Torch to sit three wide and win.

“He doesn’t have a huge turn of foot doing that.

“He did quicken off a tempo last time where had been ridden quiet.

“I thought, at the mile, he would just land in a spot off a steady tempo.

“When they quickened, he went with them and it was a good, tough effort.”

“It was a good tough win,” Shepherdson said.

“He was caught wide facing the breeze, but Luke just kept him in a really nice rhythm.

“It probably wasn’t a bad place to be the way the race was run, he could just flow in when he wanted to.

“He just dwelt at the start at his last run in Adelaide and he got further back than Tony & Calvin wanted.

“Today Luke put him into the race although he was stuck as bit wide and they way the race turned out he presented at the right time.”