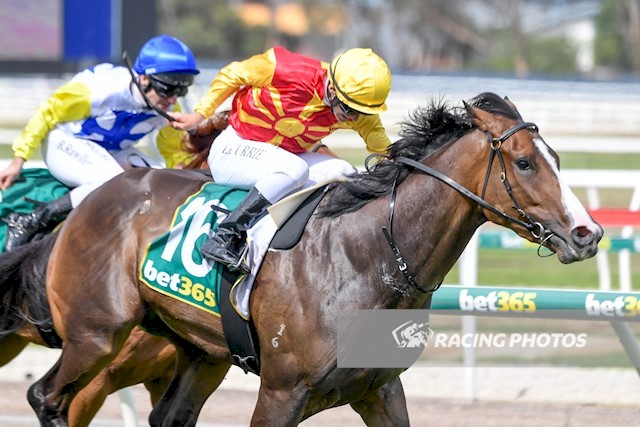 A well backed $3.90 favourite, Whykayoh was given the run of the race by jockey Luke Currie before winning the Pink Angels Cup (1300m).

Currie settled the gelding second before taking him to the lead turning for home and he was good enough to hold off his late-charging rivals.

Whykayoh now has two wins and three placings from just seven starts and looks ready to step up to city racing.

“It is very nice to have him back in the winner’s circle,” Mcleod said.

“He just had a little setback after his win a couple of starts ago.

“As a result, he was a little bit underdone last start, but we expected him to bounce back today.

“We knew he was a lot fitter today and believe he is a Saturday class performer, if not stakes grade.

“I’m not sure where Tony & Calvin will go with him but there is the Adelaide carnival coming up over the next few months.

“It was good to win the Pink Angel’s Cup – it is such a good cause,” Currie said.

“It was six weeks between runs for his last start at Flemington, so he was a bit vulnerable.

“I came here confident today but think he is still a work in progress.

“He floated along today and I was a bit concerned in the run, he never really travelled.

“He eventually proved too good for them but did need a bit of riding.

“He might be better out over even further and with a bit of headgear – there is still improvement in him.”