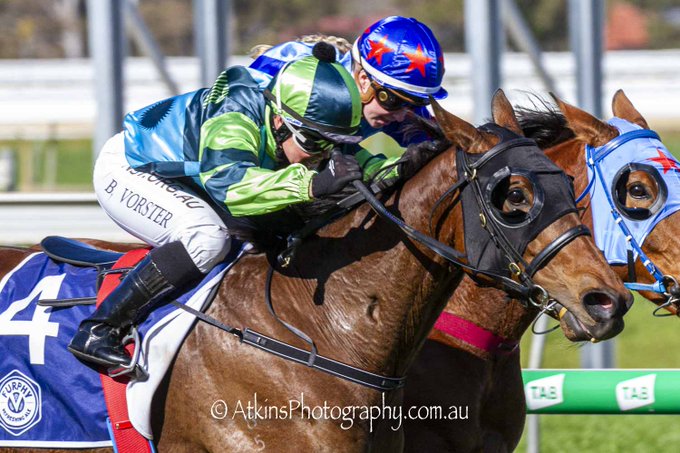 The cheers were loud when the Tony & Calvin McEvoy-trained Blow Torch proved too strong for his rivals at Morphettville on Saturday, August 15.

The five-year-old is raced by one of the Dare To Dream owner syndicates formed by Thoroughbred Racing South Australia.

“It is good initiative by TRSA and great to have another win for them here in South Australia,” trainer Calvin McEvoy said.

The win brought up a Morphettville double for the McEvoys and jockey Barend Vorster with the victory in the Schweppes Benchmark 72 Handicap (1600m) as they had won earlier with three-year-old filly Celestine.

The gelding settled in fourth spot trailing the speed before Vorster asked him to sprint in the home straight.

The leader refused to give in without a battle, but Blow Torch answered Vorster’s riding to win narrowly.

The five-year-old now has four wins and eight placings from just 19 starts collecting $144,550 in stakes.

“It is a big credit to the team,” McEvoy said.

“Both at Angaston and our farm at Murbko on the River Murray.

“I think that was his 14th run since December.

“He’s a very fit horse and we don’t have to do much with him, just tick him over and keep him happy.

“We’ve been sending him up to the farm a bit between runs.

“He really toughed it out today. I thought they would run along a bit more than they did but Barend rode him beautifully.

“He was in for the fight, that was the great thing.

“He will probably go back to the farm on Monday, lead off a pony and enjoy the irrigated lucerne.”

McEvoy said the Balaklava Cup next month could be on the program.

“He deserved to be rewarded with another win,” Vorster said.

“Early on he got me a bit frustrated by running seconds.

“He was always going to keep being there, but it was good to get a win out of him.

“I had a good spot in the run but had expected the outside horse to kick up a bit more.

“I bided my time up to the corner and had a nice economical run all the way.

“He moved up to the leader and I thought he was going to go away by a length or a length and half.

“He had other thoughts, he tried to get out of it.

“So, I had to pick him up and force him down to the line, but he is doing well and it not often you get honest horses like him.”