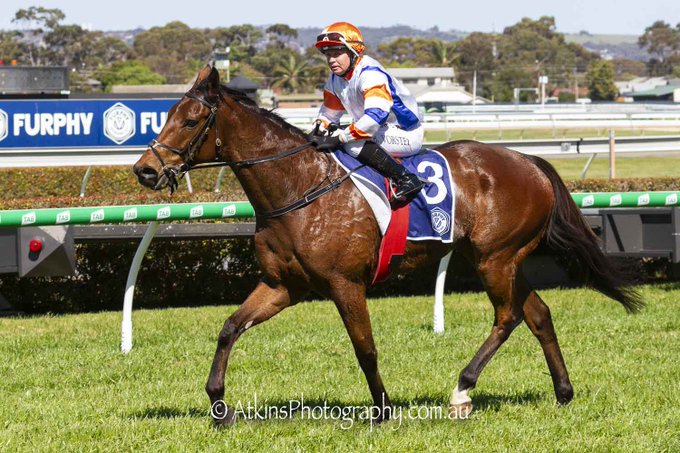 Trained by Tony & Calvin McEvoy and ridden by Barend Vorster, Allusion came from near last to score a three-quarter length win in the Furphy Handicap (1550m).

A drifter from $5 to $14, the five-year-old came through near the inside to beat Exalted Traveller ($12) with Ice Ghost ($5) a similar margin away third.

Allusion was having his first run since February and went into the race on the strength of trackwork and a 1000 metre trial at Balaklava on August 6.

The gelding’s best form had been over more ground, but the trainers felt today’s event was a perfect kick off for his campaign.

Vorster allowed Allusion to balance up early at the tail of the field before allowing him stride up behind the leaders turning for home.

The field fanned just enough to allow the jockey to take a run one off the fence and the gelding sprinted strongly to score.

Trainer Calvin McEvoy admitted he was a little surprised by Allusion’s victory.

“We weren’t overly confident today to be honest,” McEvoy said.

“He’s got a beautiful big action at home and does everything nicely.

“But with just the one soft trial going into today, I thought he would run well but improve out of it.

“It was a textbook, patient ride by Barend, going back and producing him for one last go at them.

“I’m very proud of the horse.”

McEvoy said Allusion had experienced some issues along the way.

“He had a wind operation early on and has had immature knees all the way through.

“He did win his maiden by six in town I think so he has a good first up record and there is a lot of improvement to come.”

“This horse had given me a good roll up into this race,” Vorster said.

“Even going to the gates he looked a bit woolly, but in himself he felt very good.

“I was able to ride him nice and quiet, nice and reserved to get him to finish it off strongly.

“Obviously, there was a good tempo on, and he landed in a nice position just behind a couple.

“He took a bit of time to build up but through the 300 I knew it was just a matter of finding a gap.

“Once he put his head through he was inclined to look out so I had to straighten him up.

“But he won well, and he will come on from this win.”