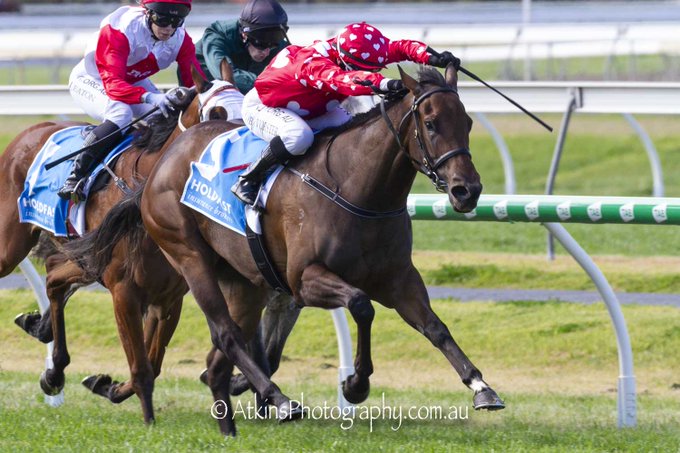 Trained by Tony & Calvin McEvoy, Celestine won her debut maiden over 900 metres at Murray Bridge last month and stepped up today to land the Holdfast Insurance Benchmark 66 Handicap (1100m) for three-year-olds at Morphettville.

Well backed at $3.10, the daughter of Nicconi, sat third early before finishing well for jockey Barend Vorster to score by 1-1/2 lengths from Jabali Ridge ($7) with The Multiplier ($5), a half-length away third.

Celestine quickly gathered in the leaders in the home straight but tended to lay in before going away for victory.

The filly straightened her action and accelerated away when Vorster switched his whip through to the left hand.

Trainer Calvin McEvoy is confident Celestine has a nice future.

“That was fantastic,” McEvoy said.

“She has taken great improvement from her maiden win.

“Her coat has come through, she’s shining at home and presented here beautifully.

“She took the right steps you want to see from her first to her second runs.

“She’s still very green and got a lot to learn.

“But she’s made it two from two and well done to the owners, Love Racing, Gavin Scholes and James Harron Bloodstock.

“Celestine looked like she was going to get there easily, then laid in a little bit but she will learn with racing, but you can’t do any more than win two from two.”

McEvoy said the stable would see how the filly came through the race before setting a program but there was a chance she could go to Melbourne.

“She’s still learning but a little bit of raw talent we have here,” Vorster said.

“She was nice and tractable throughout the run for me.

“Just when we were coming for home and asking her to do it by herself, she is still very immature.

“When she gets there (to the front), she is still waiting for a bit of company.

“When you ask her the question, she still answers it, and really quickened away for a good win.

“She gave me a bit of a hard time hanging in but I was never panicking because I knew when I got the stick through to the left and give her a reminder she was going to quicken away.

“It was nice to get a win for the owners.”