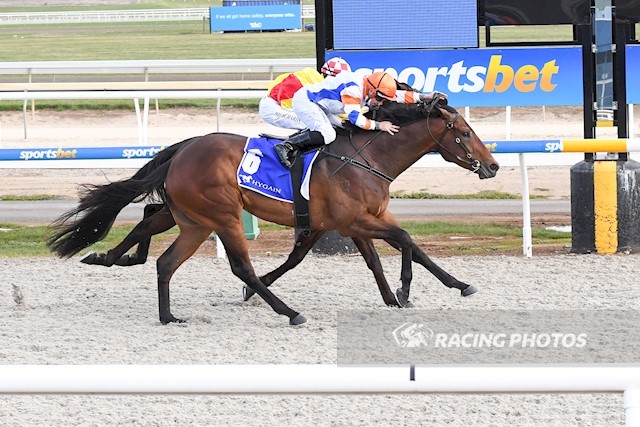 Promising Tony & Calvin McEvoy-trained four-year-old My Boy Birmingham continued his rise through the classes on the Ballarat Synthetic with his third win from just five starts on Tuesday, August 31.

In his previous runs, My Boy Birmingham had led, but today, the runner-up showed more speed and took the front in the run to the home turn.

The McEvoy-trained galloper loomed up in the home straight but seemed ‘lost’ when he hit the front and the leader kept on giving.

Holland kept urging My Boy Birmingham and the gelding prevailed for his third win on the Ballarat Synthetic.

For the trainers it was an overdue win after seconds with their other three runners at the meeting.

A relieved trainer Calvin McEvoy said while the result was right, the race hadn’t gone as he had thought it would.

“It was a good field, a field of horses that had performed at a really good level,” McEvoy said.

“He is on the way up and in his first racing prep, so we are very proud of him.

“Well done to the team. He does a lot of work on the treadmill this fellow, so a shout out to Matt.

“He goes to a place called Rosehill Park between runs, which he absolutely loves, so very pleasing.”

McEvoy said he was not sure what level My Boy Birmingham could reach.

“He is continuing to raise the bar.

“We have considered turning him out after each run, but he keeps running so well and looks fantastic.

‘When he keeps running like this, we will keep increasing his rise in class.”

Winning jockey Dean Holland said My Boy Birmingham had been taken out of his comfort zone.

“Obviously Tony and Cal have done a great job with him to get him up and consistently win races,” Holland said.

“He is still learning.

“It was something different for him today because there was one that went too quick.

“I had to come back, and he settled good, but he didn’t really have the confidence to go past it.

“Then, when he did, I felt he waited for it.

“It was good to get a winner for the McEvoys because it has been a bit frustrating for them today.”