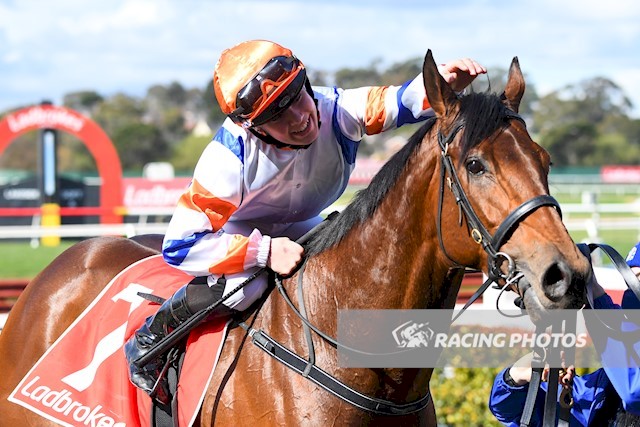 Key found for The Brumby

Trainer Tony McEvoy has always had faith in the ability of The Brumby, he just had to find out how to get him to produce it on race day.

Together with co-trainer Calvin, it appears they have found the answer.

At Sandown Lakeside on Wednesday, August 25 The Brumby powered to victory in the Ladbrokes Handicap (1600m).

Ridden by apprentice Madison Lloyd, the four-year-old, a $10 chance, scored by a length from Firstclasss Dreamer ($10) with Saint Of Katowice ($4.20 fav), a head away third.

With Lloyd’s claim, The Brumby carried 57kg and settled just off the pace.

The gelding was up running fourth as the field straightened and worked into his task strongly to grab the lead 200 metres from home.

The Brumby tended to switch off, but Lloyd kept him going for an impressive win.

The four-year-old has built a nice record of three wins and four placings from just 14 starts.

McEvoy Mitchell Racing spokesman Tim Hanley said he hoped the stable had found the key to The Brumby.

“Tony & Calvin have worked out that it was about three weeks between runs for his last win in Adelaide,” Hanley said.

“I think fresh is the key for him, for sure.

“He has always shown a lot of ability this horse.

“He has already run a couple of nice placings at Sandown.

“The Brumby ran second to Aysar back early in his career and we are thankful to the owners who have been so patient with him.

“He really deserved that win today.

“The team is going well and hopefully we can roll it through into the spring.”

Winning jockey Madison Lloyd always had The Brumby well placed and produced him at the right time.

“He is probably one of the easiest ones in the stable.

“I’ve been doing a bit of work for Calvin and Tony, and it is starting to pay off, it’s great.

“He got to the front a bit early and had a look around so I switched the whip to the left hand.

“It was nothing too drastic, I just wanted a little bit more out of him.

“He shows a bit of ability, and he’s such a pleasure.”