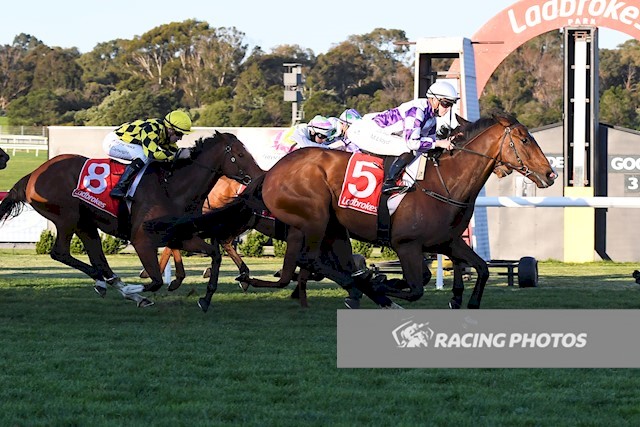 One of the unsung heroes of the McEvoy Mitchell Racing stable, Frankie Pinot, delivered again at Sandown Lakeside on Wednesday, September 1.

No better way for trainers Tony & Calvin McEvoy to celebrate the start of spring than have the ultra-consistent five-year-old win again.

Ridden by apprentice Madison Lloyd, Frankie Pinot ($18) charged down the outside to win the Ladbrokes Punter Assist Benchmark 70 Handicap (1400m) by a long head from He’s The Reel Deal ($2.70 fav) with Miltilda ($15), a half-length away third.

Frankie Pinot drifted back on settling down but really worked home powerfully when Lloyd brought him to the outside in the home straight, arriving in the last few strides.

The son of stallion Your Song has built up an impressive record of four wins and five placings from just 11 starts.

Trainer Calvin McEvoy was delighted to greet Frankie Pinot as he returned to scale.

“That was fantastic, it is a really good result,” McEvoy said.

“This horse has been racing so well this preparation and has been a little unlucky as well.

“We thought do we run today with the track a little bit firm because he loves a wet track, but we decided to press on.

“It was a beautiful ride by Maddie (Lloyd) and well done to (owners) the McDonnell family.

“We think a mile (1600m) sees him out, so we kept him fresh, back to this trip, ridden nice and patiently and he was too strong late.

“Maddie works a couple of days a week for us at Ballarat, rides a lot of nice work, so it is fantastic to give her the opportunity.”

For Lloyd, the win on Frankie Pinot was a special milestone.

“It was my first city double, and it was nice to do it for the McEvoy team,” Lloyd said.

“I love it there with them (the McEvoys), they allow me to ride some beautiful horses that give me a good feel.

“It does get cold at Ballarat, but it is something I am getting used to.”