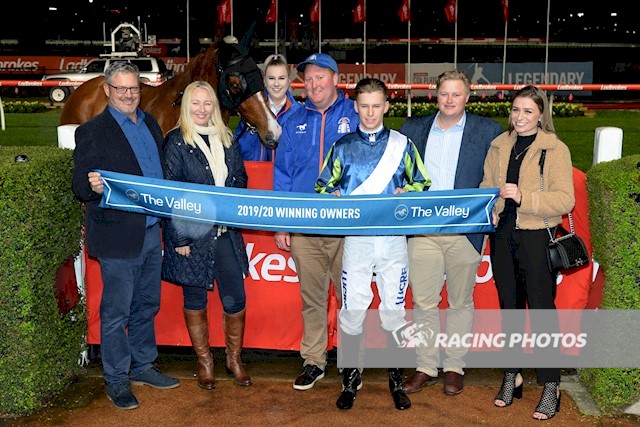 The victory gave trainers Tony & Calvin McEvoy a perfect record at the Valley for the night – two starters for two winners – having scored in the opening event with Meteorite.

Ridden by apprentice Fred Kersley, Aristocratic Miss ($4 equal fav) scored by three-quarters of a length from I Boogi ($16) in the Strongbow Blossom Rose Cider Benchmark 78 Handicap (1600m). Extreme Bliss ($5) was a similar margin away third.

Trainer Calvin McEvoy said the mare had deserved a win.

“She is going really well and a credit to the Melbourne stable,” McEvoy said.

“They’ve kept her up and looking fantastic and she was beautifully ridden by Fred.

“She has been running in a few races with no tempo and getting a bit keen.

“Tonight, Fred took the initiative from barrier one and controlled the race.

“It was her first time around the Valley, she was really strong and kicked on the bend.

“Fred has been doing a bit of work for us, so it was great for him to get a winner.

McEvoy said there was a chance Aristocratic Miss could return to the Angaston stables to be prepared for the Murray Bridge Cup in a fortnight.

“It is a Listed race over the 1600 metres, she will be rock hard fit and suited by the beautiful long straight at the new track.

“With our farm back in South Australia we have been able to give her a fairly long prep.

“The farm on the River Murray gives horses a chance to sweeten up because on the irrigated lucerne they do amazingly.

“We are lucky to have it and here is one of the results today.”

“Firstly, I have to thank the Seymour Bloodstock (the mare’s owners), Calvin and Tony McEvoy,” Kersley said.

“I’ve been close over the past few weeks for them.

“But to keep me on this mare all prep and get the job done like that is a beautiful result.

“We were fortunate to take control of things and were always travelling nicely throughout.

“From the 600 metres we stepped it up a gear and coming to the top of the straight used this mare’s brilliant turn of foot.

“She put them away nicely.”

Aristocratic Miss has been a very consistent performer with four wins and 12 placings from 26 starts earning $330,890 in stakes.