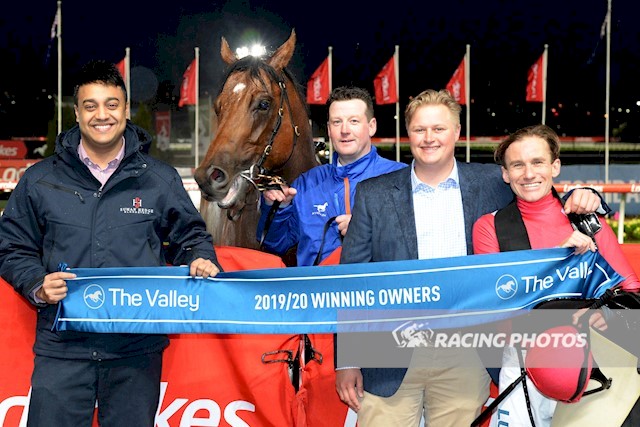 A three-year-old by Deep Field, the colt was never in danger and won as he liked.

Trainer Calvin McEvoy was pleased Meteorite had broken through for his initial win.

“This horse had put the writing on the wall,” McEvoy said.

“He ran into a pretty strong maiden at Bendigo when we were quite confident, but he ran into a smart one of Danny O’Brien’s.

“Then we stepped him up quite aggressively at Caulfield and take on some more experienced horses and just got it a little bit wrong.

“Luke was fantastic tonight. He bounced him out, crossed them but Meteorite floated a bit in the home straight.

“There is a lot of improvement there when he starts working out what he needs to be doing.

“It was a great result for Suman Hedge Bloodstock.

“We’ve made no plans after today with him, but we’ve thought for a while he would be a player during the spring.

“What level we are not sure, but he has ticked off the maiden nicely today.

Winning jockey Luke Currie believes the three-year-old has a future.

“It was nice and straight forward,” Currie said.

“He sprung the lids and put himself on speed which he trialled like and did first up.

“From the wide draw I rode him a bit quiet last time.

“He got the experience in a better race last time being in amongst them.

“Tonight, he was straight on the bunny and too good for them.

“It was his third run tonight and it doesn’t hurt to get on your bike around here when you have had it easy enough.

“When he has shown speed in his trials, he has always cornered quite well so I wanted to use it a bit tonight.”