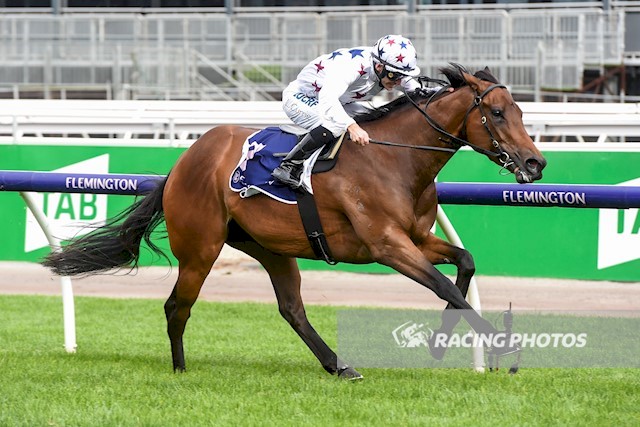 Sunlight on track for Everest

Champion mare Sunlight showed she was ready for the biggest race of her career with a brilliant win at Flemington on Saturday, October 5.

Sensationally backed from $3.50 into $2.25 favourite, sizzling Sunlight, ridden by Luke Currie, crossed from a wide draw to lead throughout to win the Group 2 Gilgai Stakes (1200m) by half a length from Santa Ana Lane ($3.50) with Zoutori ($8.50) a long head away third.

Now, the four-year-old mare, trained by Tony & Calvin McEvoy, heads to Sydney for Australia’s richest race, the $14 million Everest (1200m) at Randwick on Saturday, October 19. After today’s win she firmed from $11 into $9.

The Everest has always been Sunlight’s target this preparation and Tony McEvoy believes she is spot on.

“But I know there is another rib or two that I want to see in a fortnight, and it will be there.

“She will be screwed down now for that big contest, there is more to come from her.

“She was in the fight today with a big weight on her back.

“She is incredible, she is a true star.

“I thought Luke was fabulous on her, and it was incredible.

“For my mare to carry that weight she did against that champion (Santa Ana Lane) she showed she is force.

“When we bought her as a yearling, she looked like she had substance and she has really carried it through.

“Now she is taking us to The Everest, it is so exciting.”

Winning jockey Luke Currie is in admiration of Sunlight.

“She is speedy and is tough,” Currie said.

“Her planned runs had been in Sydney, but Tony changed plans when the rain came up there.

“It was such a smart move.

“She is on track to run a great race in The Everest.

“Sunlight continues to improve with racing, and she has had a good blow today.

“She has a two week break now into the big one and I think she has got improvement.”

With her win today, Sunlight remains unbeaten in races over 1200 metres at Flemington.