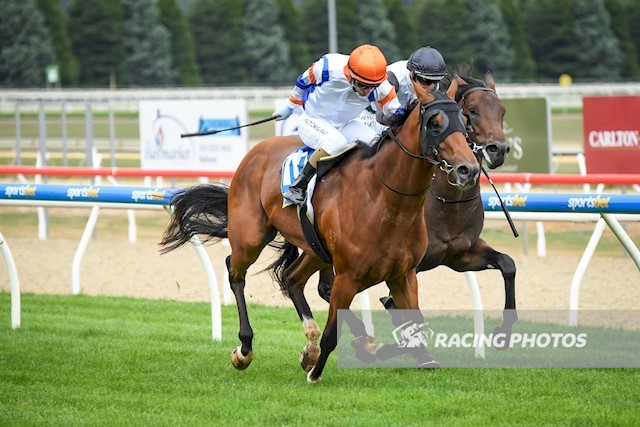 The victory was extra special for owner Wayne Mitchell who also bred the filly and retained her to race.

Starting at the big odds of $19, Swamp Vixen sat second before proving too strong over the final stages of the Whitford Liquid Waste Maiden (1200m).

Ridden by Blue Diamond winning jockey Luke Currie, the two-year-old filly scored by a length from Sandy Prince ($7) with Forgot You ($3.20 fav) a long neck away third.

The daughter of Delago Deluxe began well from her barrier eight and Currie was able to cruise across to sit outside the lead on settling down.

The runner up fought hard in the home straight, but Swamp Vixen proved too strong and drew clear over the final stages.

Tim Hanley, spokesman for McEvoy Mitchell Racing, said the stable had been pleasantly pleased Swamp Vixen had been able to settle so far forward.

“It probably surprised us a bit with her early speed,” Hanley said.

“The way she has trialled this prep suggested she was looking for a bit more ground.

“But she began so well, and Luke (Currie) rated her perfectly up on the speed and she was too strong late.

“She’ll take a lot of benefit (from the run) but she has always been one of the more professional two-year-olds we’ve had from early days.

“She’s always shown a lot of ability and hopefully she can go on with it.”

Hanley joked with trainer Calvin McEvoy about taking the filly to the races now the stable is based on course at Ballarat.

“I actually said to Calvin that she travelled over beautifully so he got a bit of laugh out of that.

“She was lovely and relaxed, very professional today and did everything right.”

“It was a credit to the McEvoy team, both here and in Adelaide, she came forward and did everything right,” Currie said.

“It (the education) takes you a long way in these races, especially these early ones when they are only having their first or second go.

“She was very professional, got it all really right.

“I thought off her jump outs and trials she might be back off them and struggle to keep that speed, but she flew the machine, and they didn’t go overly hard early.

“They sort of hacked along it was sort of a track gallop, home three, so she was able to be comfortable and flow along outside the leader.

“She gave a good kick and was good through the line.”