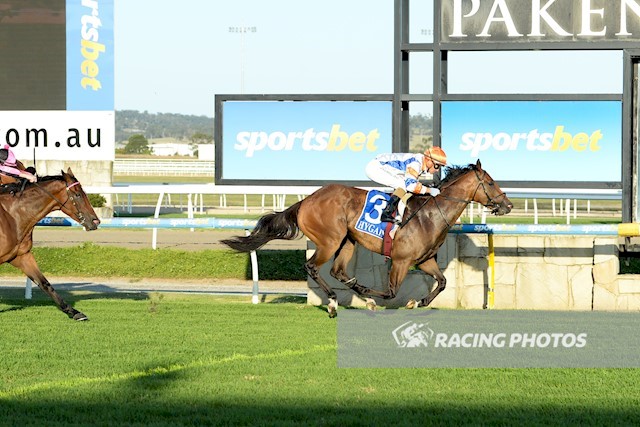 First starter Cuban State gave his rivals something to chase, and they couldn’t catch him, at Pakenham on Thursday, February 18.

Trained by Tony & Calvin McEvoy, the three-year-old made his debut in the Magic Millions Adelaide Maiden (1400m).

Jockey Luke Currie allowed Cuban State to stride forward after a good beginning and the $15 chance found the lead.

Currie rated the gelding perfectly and dashed him home over the final 400 metres.

Cuban State never looked like being caught and scored by 1-3/4 lengths from Little Miss Gutsaa ($11) with Joltin’ Joe ($15) a long neck away third.

The placegetters were in the lead group throughout and ran strongly to the finish.

“It was a very good win,” McCarthy said.

“First up it is not easy to do it from the front.

“First up 1400 metres was probably a bit of an ask from an awkward gate but he showed a lot of guts and was brilliant.”

McCarthy was unsure about the future, rather getting the first run out of the way.

“The owners need a good old shout here, they have had to be very patient with him.

“He’s had quite a few breathing issues that have held him up quite a bit.

“It is great we have been able to get him to the racecourse and he’s shown his ability.”

Winning jockey Luke Currie said it had been a nice, easy ride.

“He jumped quite well and in his jump outs and trials, he has shown enough speed to be on pace.

“Tonight, there was nothing else which wanted to go so I kept pressing and took his time to get across to the front.

“Being his first time, he pricked his ears and switched off which was good and gave him a chance to breathe.

“He was always going to be hard to beat straightening and gave a good kick and ran right through the line.”

Currie said it was a big, long straight to be in front the whole way.

“At his first go it was a really good effort.”