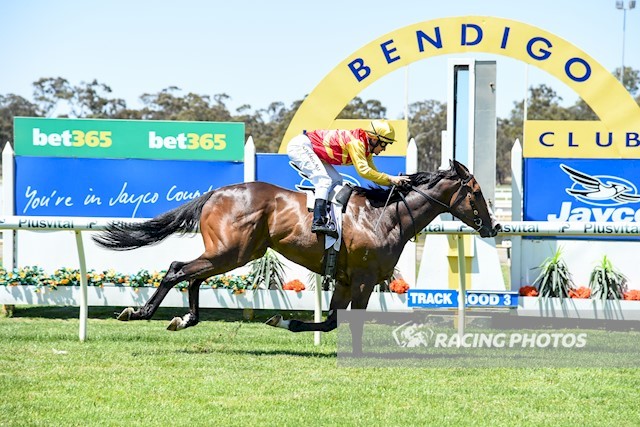 Talented three-year-old Whykahoh landed some good bets in breaking his debut at Bendigo on Thursday, November 28.

After opening at $3.50, Whykayoh had solid support to run the $2.10 favourite in the McCaig Air Conditioning Maiden (1300m).

Taken to the front early by jockey Luke Currie for trainers Tony & Calvin McEvoy, the gelding was never seriously challenged in scoring a 2-3/4 length win from Rogues Point ($10) with Charvet ($3.60), three-quarters of a length away third.

Currie did ride Whykayoh up from a wide gate to find the front but was always in control for an easy win.

The gelding had been placed three times from his previous four starts but judging by today’s win, it won’t be his last.

“it was a good performance today, second up after a decent layoff,” Shepherdson said.

“It is good to have him back in form and break the maiden.

“He had a bit of clean up surgery which kept away from the track for a while.

“We gave him the time he needed because he is a big growing horse and he is starting to furnish now.

“It was a good performance today as there was a bit of pressure on him early.

“He was very strong late.

“He got to a nice level without winning as a two-year-old, but the probable next progression is to a city midweek.

“We’ll see how he pulls up and what the program is.”

Winning jockey Luke Currie was not surprised by the win.

“He’s taken his time, but he is a nice big strong horse,” Currie said.

“The run last time did him the world of good.

“Today might not necessarily be the way to ride him.

“I had to chase him along to lead, then when I dropped my hands after the line he idled right down.

“We still have to work him out a bit, but he was too good for those today.

“The track is quite firm which can suit on-pace runners but today he was the best horse.”