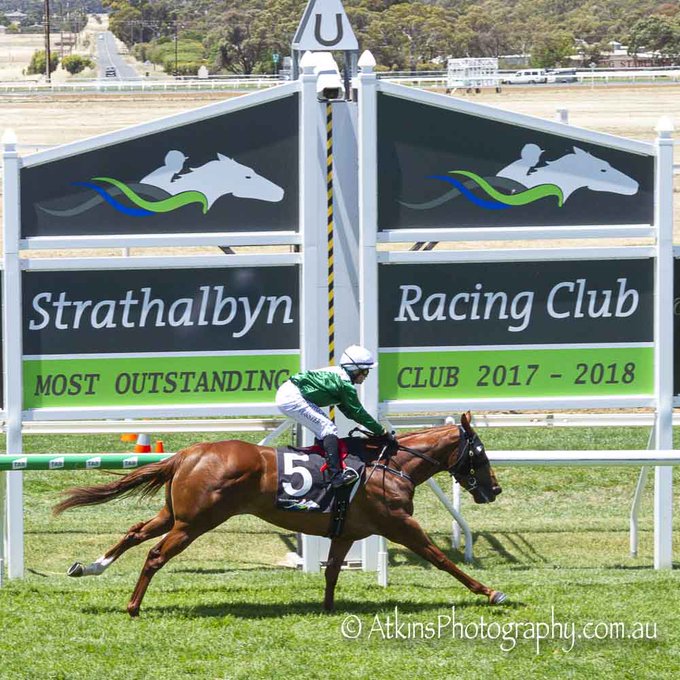 Beautifully bred three-year-old filly Daania made a winning debut at Strathalbyn on Wednesday, November 30 and in the process brought up a milestone for the training partnership of Tony & Calvin McEvoy.

The filly was the pair’s 50th winner since starting their partnership at the beginning of September.

Her win also gave the McEvoys’ the brilliant winning strike rate of 34% from their last 50 runners to be a significantly in-form stable.

Daania, owned by Emirates Park Stud, was given three trials before her first start.

Impressing in her trials, the daughter of Sepoy started a red hot $1.35 for jockey Barend Vorster and scored a two-length win in the Goolwa Central Meats Maiden (1200m) defeating True Illusion ($8) with Ahiga ($10), a half-length away third.

Daania jumped well from gate two but was headed early and Vorster was happy to take the sit on the leaders to the home turn before seeking a run.

He pushed the filly through a gap on straightening and she quickly put paid to her rivals.

John Cornell, South Australian stable foreman for the McEvoys, said the filly had taken time to reach the track.

“She’s a big filly and it has just taken a while for the penny to drop,” Cornell said.

“It hasn’t all been natural for her, we have had to teach her.

“She had been to the trials three times and was ready for a race today.

“She has got it worked out now and we’re happy.”

Cornell said he had always been happy in the run.

“I was never really worried watching it live.

“Barend would know what to do and just waited for the run.

“She had a lovely turn of foot and it was good to see.”

Winning jockey Barend Vorster said he was confident of obtaining a run in the straight.

“Ideally you would like to work out off the fence,” Vorster said.

“I tried to keep myself in a position where there were options.

“On this little track, when you are turning for home, there is always an opportunity which presents itself.

“I had to be a little bit patient and when it came she was nice and professional, stuck her head in there and came away nicely.”