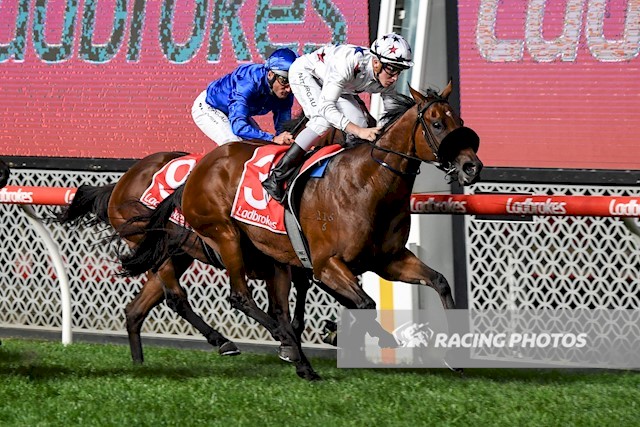 Sisstar, the younger sister of champion mare Sunlight, staked her own piece of racing history at Moonee Valley on Friday, March 19.

The four-year-old mare smashed the 955-metre track record clocking 54.45 seconds, taking 0.9 off the previous best run by her stablemate Meteorite.

Importantly for trainers Tony & Calvin McEvoy, it kept their hands on the $55,000 cheque from sponsor Ladbrokes.

The sponsors provide that cash for the trainer of the horse that runs fastest over the 955 metres during the night racing season.

Sisstar ($4.80 fav), ridden by apprentice Matthew Cartwright, finished strongly to win the Ladbrokes 55 second challenge final (955m) by a half length from Lesage ($5) with The Last Napoleon ($16), a head away third.

The mare made great use of barrier one and appreciated the 3kg claim of Cartwright.

Sisstar began nicely and kicked through to sit third on the fence behind Lesage which had crossed and was desperate to lead.

The mare looked in a bit of trouble rounding the home turn when boxed up, but Cartwright angled her off the heels of the leader and she sprinted to claim victory.

Trainer Tony McEvoy was overjoyed with the win.

“That was incredible,” McEvoy said.

“To be the last heat and run the record – that is really flying.

“She is a better class than Meteorite, but he was on his game that night in perfect conditions when he ran the record.

“That was really exciting tonight, the young fellow (Matthew Cartwright) did a great job, and the claim was significant.

“Half a kilogram off the minimum for a Group 3 winner in this grade.

“Matthew did a good job and showed a lot of maturity for a young fellow.

“That is what you need in this game is a bit of push and shove, and he was happy to do it, and I’ll be using him again.”

Sisstar has now won five races from 14 starts, collected more than $500,000 in stakes and bonuses, is a black type winner, and now a track record holder.