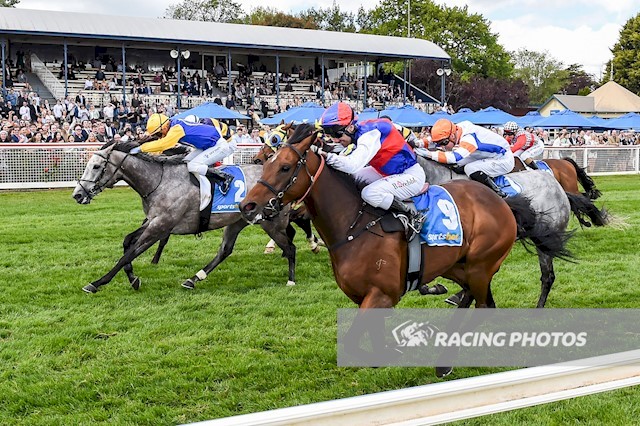 Ultra-consistent grey mare Silent Sovereign had to settle for a share of first prize in her consolation prize on Ballarat Cup day, Saturday, November 20.

Trainers Tony & Calvin McEvoy had hoped to have Silent Sovereign contest the feature event, the Listed Ballarat Cup, but unfortunately the mare didn’t obtain a start.

Ridden by Luke Currie, Silent Sovereign settled towards the tail of the field but gradually improved to be midfield in a striking position on the turn.

A $9 chance, Silent Sovereign ran home powerfully and made a bound late, but the judge couldn’t find a margin and she had to share first prize with Just Benjamin ($10).

Seawhatyouthink ($9) ran on well to grab third a head away, just in front of the McEvoy-trained Sign of Ussuri ($21).

“I suppose it is nice to share it with a good mate in Sam Freedman (who co-trains Just Benjamin with his father Anthony).

“We are very pleased with the mare.

“We had her here to peak third up, and 2000m without a jump out just third up was a fantastic effort.”

McEvoy said there had been confident Silent Sovereign would be hard to beat.

“There is more improvement to come.

“She is going so well for connections.”

The five-year-old mare has four wins and six placings from just 19 starts and has been ultra-consistent for the McEvoys.