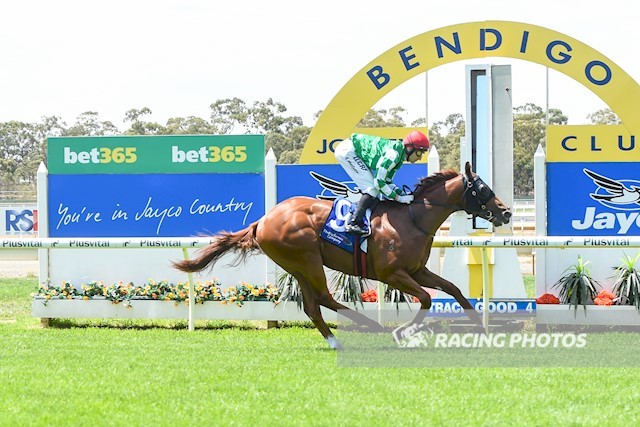 Trainer Tony McEvoy has had a big week with six of his last seven runners winning following the success of Yulong Savings on debut at Bendigo on Friday, February 8.

The colt is owned by Yu Long Investments and followed a win two days earlier for the same owner-trainer combination with Rowsthorn.

“The blinkers on today were a great benefit,” Shepherdson said.

“Andrew gave him a good ride and he put a margin on his rivals at the finish.

“Bendigo is such a good place for young horses to make their debut, it is always in great order.

“Tony has always hard a target to aim him at the Adelaide Magic Millions and I think he is well on track for that.”

Shepherdson pointed out that Yulong Savings was the stable’s fifth individual two-year-old winner in just over a week.

“We were a bit quiet pre-Christmas but with time they are really running along now.”

“He had good grounding from a very professional two-year-old stable,” Mallyon said.

“It was a bit willing early and I thought about trying to ride the perfect race but decided they were going a tad too quick and rather let be where he was happy.

“I just cruised along in my own gear then when he quickened, he put them away really easily.

“He idled to the line and there is a bit of improvement as well.

“I trialled him down the straight about six weeks ago and he didn’t feel like a straight forward two-year-old but has come along in leaps and bounds.”