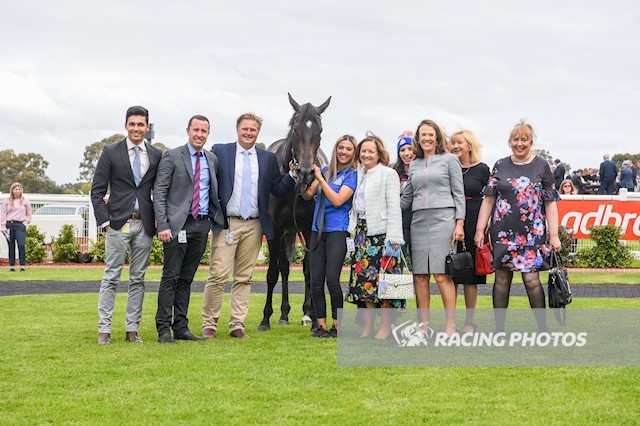 The McEvoys prepared Xilong, winner of the Listed Twilight Glow Stakes (1400m) earlier in the day and Pretty Brazen gave them a double in the black type Guineas.

Trainer Tony McEvoy said Pretty Brazen would head for a break before being given the opportunity to tackle the top autumn three-year-olds next year including potentially the Australian Guineas at Flemington.

“Now that I know she can run a strong 1600 metres there’s a number of races that will be available,” McEvoy said.

“We can look to the Australian Guineas but there’s also options in Sydney.”

McEvoy said Pretty Brazen oozed class at the yearling sales and owner Linda Huddy was forced to bid $700,000 to purchase the filly.

“She’s got class, beautiful movement, has a beautiful temperament and the reason she cost $700,000 was I wasn’t the only one that liked her,” McEvoy said.

“There was a lot of competition and I think we can relax now and enjoy the future.

“We had a sit down after Flemington after she ran so well and I said to the Linda and Graham Huddy, the owners, let’s have a go at the mile.

“It’s worked out magnificently and to win a Group Two with a valuable filly just means so much.”

McEvoy said to have been able to win after being ridden a little out of her comfort zone showed her quality and class.

“Luke was a little concerned about the early tempo, so we allowed him to press a little bit.

“When he asked her to come back, she accepted that request and it won her the race.

“She was very good first time out to the 1600 metres,” Currie said.

“I had to use her a bit early because of the tempo of the race.

“She’s better suited when she’s off speed but after racing on the pace today it was a tough effort.

“I think everyone had the same idea as me that there wasn’t a lot of speed, so a few wanted to hold their spots.

“Once the field settled the tempo was quite good and she relaxed good in behind it then got a good run on the inside in the straight.

“She has always shown us plenty but has taken a bit of time, but she is really building a nice record now.

“There are better wins in store for her for sure.”