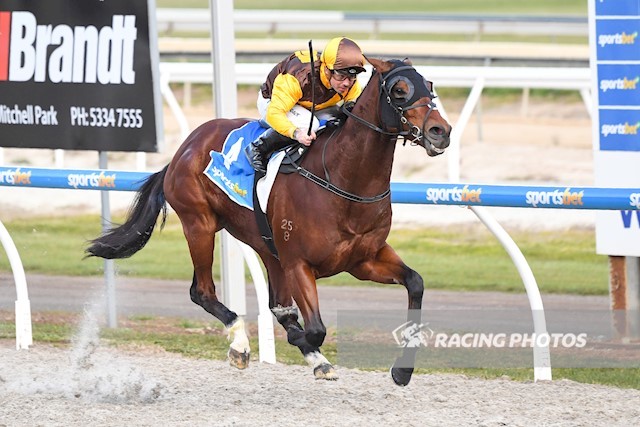 Famous vigneron Wolf Blass looks to have a promising galloper in Knight Batchelor, an easy winner on the Ballarat Synthetic, on Tuesday, July 12.

With blinkers on, Knight Bachelor led throughout in the Bill Paton “this year could be different” Maiden (1400m) scoring by five lengths.

A longtime supporter of the Tony & Calvin McEvoy stable, Blass wanted to race a horse by his former outstanding galloper Alpine Eagle, and Knight Batchelor is the result.

The three-year-old was beaten on debut at Bendigo last month on a heavy eight track.

Today, with blinkers on and the synthetic surface, Knight Batchelor showed his true talent.

Ridden by Dean Holland, the gelding bounced quickly from a wide draw and was pushed forward to find the lead.

Once in front, Holland rated Knight Batchelor perfectly, then asked him to extend in the home straight and the gelding bounded away to win easily.

Knight Batchelor carries the same name as a former high-class galloper in South Australia which was trained by the late John Riggs who was a very close friend of Blass.

Trainer Calvin McEvoy said it was an encouraging effort by Knight Batchelor.

“It was not an easy watch early,” McEvoy said.

“They were playing jockeys out there, and the horse that went up on his outside tried to take him on, so he had to do it the tough way.

“But it was really good to see him extend like that, and the blinkers did the trick today.

“He’s a really nice horse but mentally taken a little to get here.

“But he is only three, he’s by Alpine Eagle.

“We’ve got to thank Wolf Blass for his patience.

“Wolf owned Alpine Eagle who was a really good horse. He wanted us to go out and buy a nice Alpine Eagle, which we did, and hopefully he will go on with it now.”

“Knight Batchelor has got plenty of potential,” Holland said.

“I have to thank Mr Gray, the clerk of the course, he probably saved me and the horse on the way to the gates.

“He hit the fence coming out of the laneway on the way to the barriers, and without him, we would have been in a bit of trouble I reckon.

“It just goes to show how good a job they do, he is only a young clerk coming through, but he is going to be one of the better ones.

“This horse won really well after coming from a wide barrier.

“He stepped fast so I made the decision to go forward.

“He’s the one that had to work to get across, then he had a nice restful run when he got to the front.

“He gave a really good kick and I felt he was still floating in the home straight, so plenty of potential.

“The McEvoy team go well all year round, and the synthetic horses really thrive because they are worked here.

“It is good to get winners for these type of stables because they are good supporters of mine.”