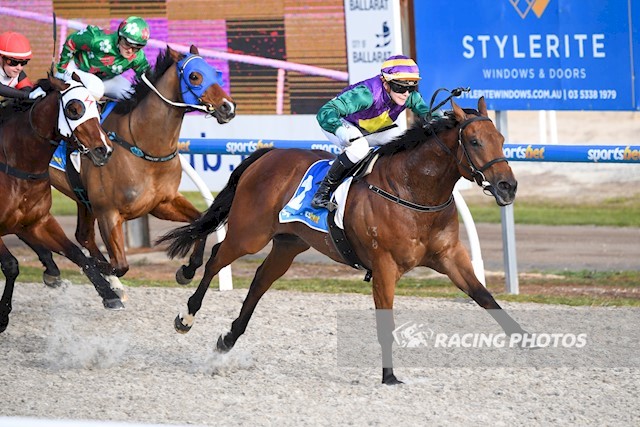 ‘Diminutive Hurtle carried a huge impost of 62.5kg to win on the Ballarat Synthetic on Tuesday, July 12.

The three-year-old was trapped four wide in the early stages but still proved too strong, holding his rivals at bay.

Hurtle began well from his wide draw but apprentice rider Celine Gaudray found three rivals pushing up inside to keep her four wide.

Gaudray, who claimed 1.5kg off the gelding’s 64kg allotted weight, didn’t panic and allowed Hurtle to get into a good rhythm.

In the home straight she asked the three-year-old to extend and he drew clear to win.

“Hurtle’s a horse who won very well at his first start,” McEvoy said.

“He lost his way a little bit, he’s a bit of a ball of energy.

“Thank you to the owners, a couple of them were getting a bit annoyed with him.

“We knew he was quite effective on this surface.

“In a benchmark 58, he had to carry a lot of weight and he is not a very big horse.

“When we get him up in grade and down in weight, he will be better again.

“He can go through his grades in the next few races, and hopefully he transfers it onto the turf because he can gallop.

“He has got a few little quirks we are trying to iron out, but thanks to the ownership group headed up by Mark Milano, it was good to get a result.

“Hurtle is very fast, how much further he will get I’m not sure, but it was a pleasing result and thank you to the team at home who do all the hard work.”

Winning jockey Celine Gaudray had been confident of victory on Hurtle despite being trapped wide.

“It was a terrific performance from him,” Gaudray said.

“He jumped well, but there was a lot of speed in the race, so he got caught a bit wide.

“He was just too strong for them.

“He was travelling really well for me, I just kept him happy, he was better than these horses.”