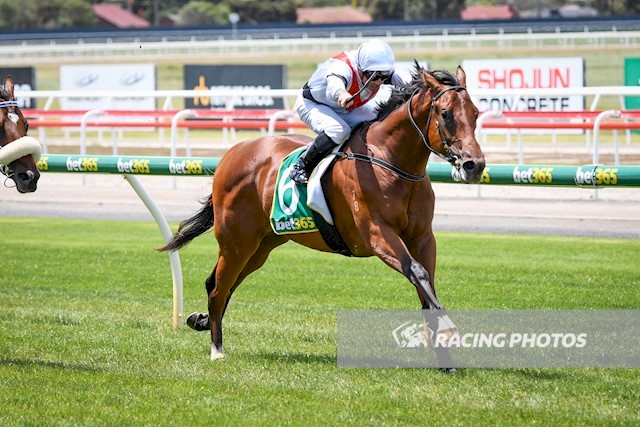 Trainers Tony & Calvin McEvoy celebrated the birth of their new Ballarat stable in Victoria with a win with the first runner from the establishment.

Two-year-old Pegasi lined up at Geelong in the bet365 Odds Drift Protector Maiden (1147m) and led throughout, but not without incident.

The horses went to the gate for the running of the race, but a rider was dislodged from another starter forcing a hold up at which time a rainstorm, with hail, swept the course.

With the delay while the injured jockey was taken to hospital, horses returned to their stalls before heading out again to race.

Pegasi, a drifter from $6 to $10, ridden by Dean Holland, showed great speed to cross from an outside gate and lead clearly, showing the pace of his half-brother, the Moonee Valley 955 metre record holder Meteorite, also trained by the McEvoys.

Holland asked the colt to sprint turning for home and Pegasi did enough to win by a half-length from Light Saber ($5,.50) with Tranquil Bay ($2.30) a half-head away third.

After training out of Flemington in Melbourne for a decade, the McEvoy Mitchell operation decided to move to new Ballarat stables and the complex welcomed its first horses earlier in the week.

Finn McCarthy, stable spokesperson for McEvoy Mitchell Racing, said the win by Pegasi, which was having its second start, had been fantastic for the new Ballarat stable.

“It is terrific to get off to a good start for the new yard,” McCarthy said.

“We thought this guy would learn a lot from his last run.

“He did quite a bit wrong, but he learned an awful lot from it and was very good today.

“The race experience definitely counted for him today.

“He took everything in, especially with the delay

“He handled himself very well but showed a lot of natural speed and was too good.

“We’ve always had a good opinion of this fellow, he will definitely learn again from this race and hopefully he can go on with it.”

“It was a credit to all trainers in the race,” Holland said.

“The horses were very well educated, and we were lucky because it was pretty hectic weather.

“My bloke kept it together.

“I had him with the pony going back to the mounting yard then just trotted him around the second time.

“He threw his head up at the start but didn’t lose any momentum.

“After three strides he nipped across them, and like I said, very well educated and it made my job a lot easier.”