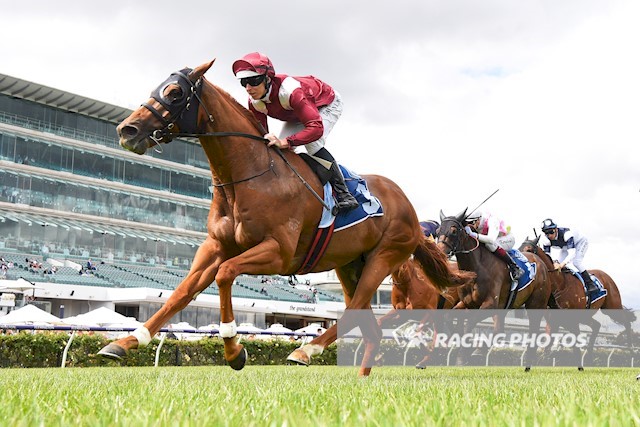 After an unlucky third at his previous run, Over Exposure, ridden by Damien Lane, made amends with a brilliant win in the Furphy Refreshing Ale Trophy (1600m).

After jumping away nicely, the gelded son of Rothesay settled one off the fence trailing the leading group of three.

Lane was able to grab a run between the leaders turning for home and Over Exposure ran through the line strongly to score impressively.

The winner has built an impressive record of five wins and six placings from just 19 starts earning $381,650 and proving a value buy costing McEvoy Mitchell Racing just $75,000 at the 2016 Gold Coast Yearling Sale.

Trainer Calvin McEvoy was delighted to see Over Exposure back in winning form.

“It was fantastic,” McEvoy said.

“Another beautiful ride by Damien. He had to be a bit patient there for a while.

“He’s been training so well and his gallop leading into this race was very good.

“The team at Flemington have done a great job with him.”

McEvoy said the stable had an ambitious program for Over Exposure.

“He’s a stakes winner and we are going to try and get him to the Blamey (Stakes).

“If that means a run in the Carlyon Stakes, then so be it.

“He’s up to that level and he has come through all his niggling injuries and little bits and pieces that happened to him.

“He’s a lovely sound horse now and we are going to get rewarded.”

Winning jockey Damien Lane was delighted to have kept the ride on Over Exposure.

“I was able to tack up into a nice spot without using any petrol.

“I had a little look around on the corner assessing whether the gap was going to open, or I had to come back around.

“Fortunately, the run came and he was too good.

“I’m very impressed by the horse.

“He was good at Pakenham first up where he was a bit fresh and they were a bit sharp for him.

“Second up here I was lucky to pick the ride up off Luke Currie but had no luck and I got him beat that day.

“I am very grateful to Tony and Calvin and the connections and he was too good today.”