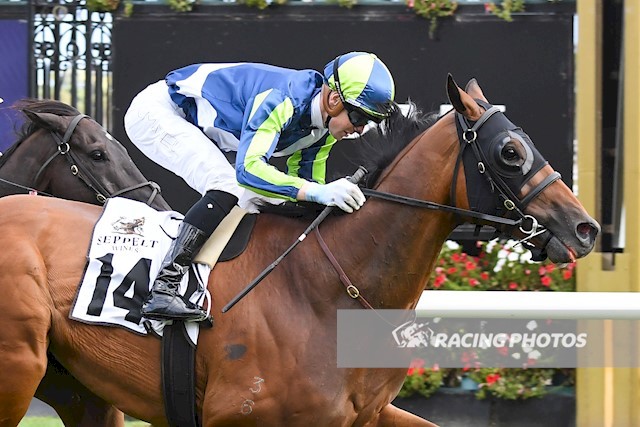 Promising stayer Coolth took another step down a possible Adelaide Cup start with a strong win at Flemington on Saturday, January 16.

The win gave trainers Tony & Calvin McEvoy a Flemington double with Over Exposure winning earlier in the day.

Starting at $6, Coolth beat Sikorsky ($26) by three-quarters of a length with Yulong Captain ($16) a similar margin away third.

A lightly raced four-year-old by Dundeel, the winner is still very inexperienced but shows plenty of staying promise.

He settled in the back of the field of 14 before working forward approaching the home turn.

McNeil pulled Coolth to the centre of the track to give him clear galloping room in the home straight and the gelding warmed to his task finishing best.

Trainer Calvin McEvoy said the stable had good plans for the winner.

“It was fantastic,” McEvoy said.

“He just over-travelled a little bit with the blinkers on.

“He’s still very new to the racing game with everything he does.

“When he came into the straight and tried to quicken, his big action, he went right up into the air.

“Credit to the team, Coolth has been trained from Flemington but coming down to Ballarat for his last couple of gallops up the hill so it has been a bit of a mix between the two places.

“Darren Thomas (owner), Tony (McEvoy) and myself, with Mark Pilkington have had a long-range plan of getting this horse to the Adelaide Cup.

“We’re working our way back from there and spacing his runs.

“He’ll go to the Frank Torney Cup at Moonee Valley, over 2500 metres.

“It is great to see him bounce back after being a bit disappointing last time.”

Winning jockey Jye McNeil is a fan of Coolth.

“He certainly is a progressive horse,” McNeil said.

“There is going to be plenty of upside to this guy.

“He is still very immature and paraded a little bit hot but to give him the benefit of the doubt with the blinkers on first time.

“In the run, horses were travelling past him and he was just wanting to go a bit keen in those stages.

“Once he puts it all together, he is going to make a nice stayer.

“Natural progression will take this horse a long way and I thought it was a fantastic move by the team to put the blinkers on because it was a much better performance by him today.

“The future is bright for him.”