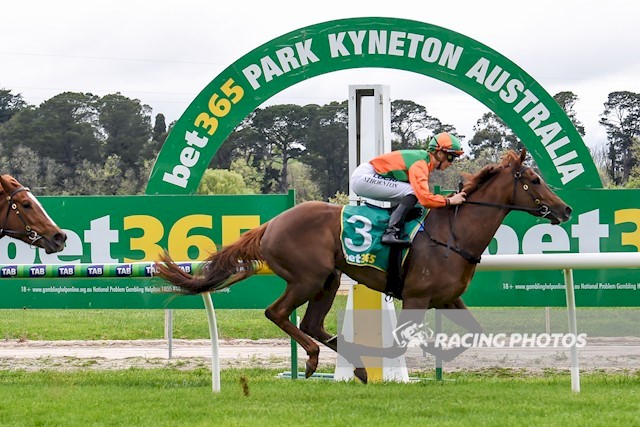 Impressive debut winner Jentico could be headed to Adelaide following her effort at Kyneton on Tuesday, October 16.

Trainer Tony McEvoy said he there was a 64-rating race at Moonee Valley and a 68 rating in Adelaide as possible options for the three-year-old filly by Written Tycoon.

“It was a very good win,” McEvoy said.

“She began nicely, Steph was positive, and the filly stayed in a good rhythm despite another horse pressuring outside.

“Jentico gave a kick on the home turn and I thought got a lost in the home straight, maybe a bit lonely.

I have to thank the owners, the O’Briens (Lauriston Thoroughbred Farm) for being so patient.

“I’m thinking maybe the Adelaide option might be best during the spring for the filly, but I’m sure she can measure up in the city in time.”

“I’d done a bit with the filly so knew what to expect,” Thornton said.

“I had to ride her up a bit from the wide gate, but she settled well then gave a good kick.

“She gives me a really nice feel and I’m sure Tony will pick out the right race for her going forward and I’d like to stay with her.”

Jentico was bred by Lauriston Thoroughbred Farm and is the third winner from the dam Swift Sands.