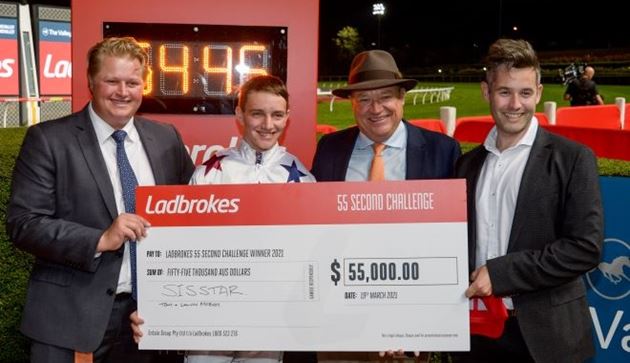 Trainers Tony and Calvin McEvoy collected their own ‘Group One’ stake at Moonee Valley on Friday, March 19.

Sponsors Ladbroke offer $55,000 in cash to the trainer of the fastest horse in their 55 second challenge series during the night racing season at Moonee Valley.

Meteorite, trained by the McEvoys, broke the track record in winning a heat on October 2 last year clocking 54.54 seconds to put the trainers in the box seat to collect the prize.

That figure stood with the final heat to be run on Friday, March 19.

Pre-race, Tony McEvoy joked he didn’t think Meteorite’s time would be beaten, but if it were to be broken, his mare Sisstar was the only one allowed to do it.

The four-year-old mare must have overhead the trainer and finished powerfully to win the 55 Second Challenge (955m) clocking 54.45 seconds to set a new figure.

For the McEvoys, it importantly kept their hands on the $55,000 cheque from Ladbrokes.

Trainer Calvin McEvoy said he had done all the work with Meteorite but admitted his father Tony had prepared Sisstar from the stable’s Angaston base in South Australia.

“He (Tony) hadn’t seen Meteorite for a long time when he won but he’s got it back on me now,” Calvin said.

Tony McEvoy said a big thanks had to go to Ladbrokes.

“This is such a significant thing for us trainers,” Tony said.

“It’s hard to make a quid in this business so to have something like this you can see how the 955 metre challenges have been supported.

“A big thanks to Ladbrokes, it is fantastic.”