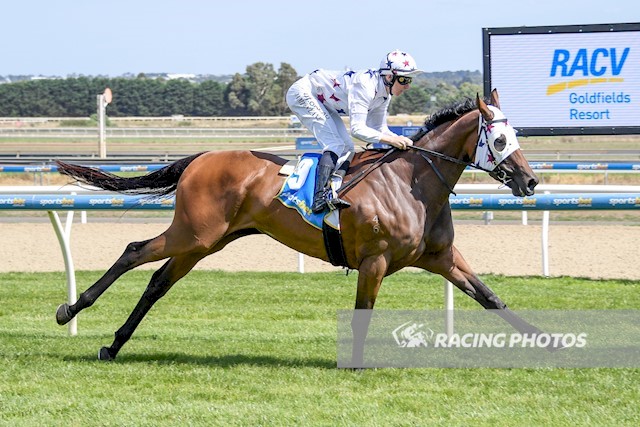 Promising filly Zoulah bounced back to winning form with a dominant victory at Ballarat on Sunday, February 23.

Zoulah, trained by Tony & Calvin McEvoy, was an impressive maiden winner over 1623m at Sale early in January which prompted connections to seek black type in Hobart earlier this month.

After being given the run of the race in the Stutt Stakes (2100m), the filly failed to finish off and was unplaced.

Back to 1600 metres, but perhaps more importantly with blinkers on, Zoulah returned to winning form.

A $6 chance, and ridden by Damien Lane, Zoulah dashed away to win the RACV Goldfields Resort Grand Handicap Mile Exempt Race by 3-1/4 lengths from Battle Master ($4.20) with Atame ($7), two lengths away third.

Zoulah began well and settled in the second pair behind the leaders before Lane pulled her wide on straightening.

Her acceleration was incredible, and she quickly spaced the opposition to win easily.

“She really put them away today,” Mcleod said.

“When she won her maiden at Sale, she was impressive but lacked a killer punch late.

“When Regan (Bayliss) won on her at Sale he thought there was a bit more to give.

“We tried her out in distance in Hobart, but she didn’t seem to quite run it out.so back in trip and blinkers on and she did amazing.

“At this stage the 1600 metres looks her trip but in time she might get further.”

“She won her maiden in good style but didn’t run up to her ability in Hobart,” Lane said.

“It was good to see her bounce back today and she left them standing in the home straight.

“She is certainly going to win more races.”