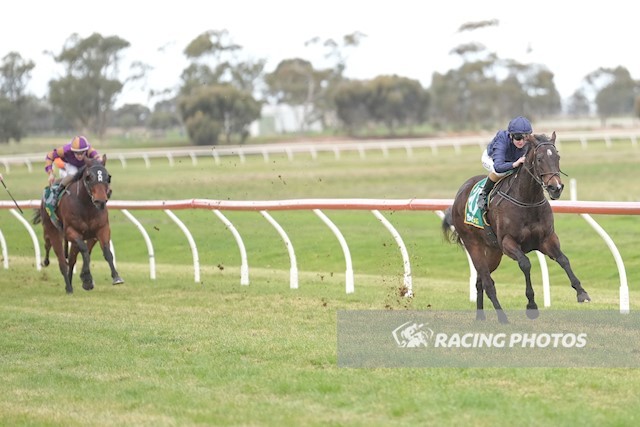 A race that boasts the champion Nature Strip among its recent winners could be the next target for impressive filly Royal Dress following her dominant win at Donald on Sunday, June 25.

The Lightning is a set weights race for two and three-year-olds, which was won by Nature Strip in 2018, and is one of the few SA features not won by the trainers.

At Donald, Royal Dress, with Alan Kelly in the saddle, flew the gates and cruised across to lead comfortably and travelled beautifully to the home turn.

Kelly then asked her to extend, and she raced away to score easily from Rigel Star ($7) with Never Say Nay ($9.50), a head away third.

“She is a gross filly and got plenty of condition,” McEvoy said.

“We thought she was forward enough first up at Swan Hill but knew there was improvement to come, and that showed today.

“Thanks to the guys at Coolmore, Tom Magnier and the team.

“She had an entrapped epiglottis after a disappointing first prep.

“They were weighing up whether to retire her as she is well bred, being by I Am Invincible, or let us have another go.

“Thankfully, she is back two for two this preparation.”

McEvoy said it had been discussed that the Lightning Stakes at Morphettville could be a good target.

“If she continues to improve we could give her a go because if we can black type on her she would be a very valuable filly.

“She is very quick and that is her make up.

“I was surprised how easily she got the lead, and the controlled tempo Alana got her in. They are getting on well and I wouldn’t see any reason to take her off.”

“She flies the barriers which is a really great asset.

“The filly had the opportunity to lead on her own today.

“She rates herself so beautifully, she likes having a long rein and do it on her own.

“She is a real racehorse.”