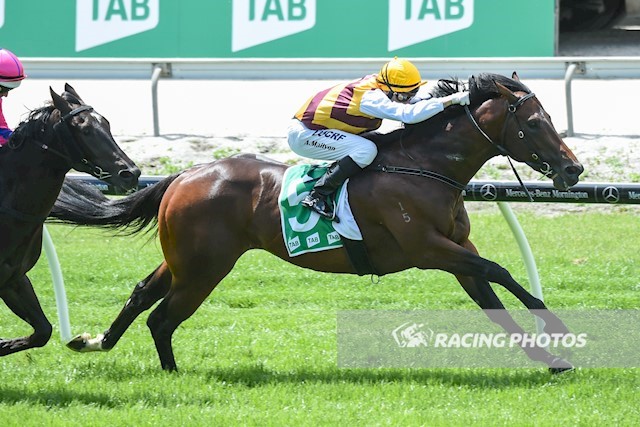 Truth in a name

Trainer Tony McEvoy breathed a sigh of relief when Still Invincible led throughout to score his maiden win at Cranbourne on Sunday, October 21.

The three-year-old son of I Am Invincible was heavily backed on debut at Moonee Valley on October 5 but was slow to jump and never a chance in finishing sixth.

“He hated Moonee Valley and I hated watching it,” McEvoy said.

“Today, he jumped well and appeared to enjoy what he was doing.

“He began much better and was able to control from the front although he still wanted to look around in the home straight. It was lovely to see.”

McEvoy said he was planning to run Still Invincible in a Benchmark 64 at Bendigo on October 31 before tackling the Hilton at Flemington on November 10.

“I believe he is a good quality colt.”

Winning jockey Andrew Mallyon was impressed by the victory.

“He came out of the gates like an Oakleigh Plater,” Mallyon said.

“He relaxed in front, got into a lovely rhythm and treated it like a track gallop.”

Mallyon said Still Invincible had plenty of upside and believed the gelding might be better chasing rather than leading.

“He’s got a lot of upside and can make the grade for sure.”

Still Invincible cost McEvoy Mitchell Racing $900,000 at the 2017 Gold Coast Magic Million Sale and is owned by the Peachester Lodge of Linda and Graham Huddy.