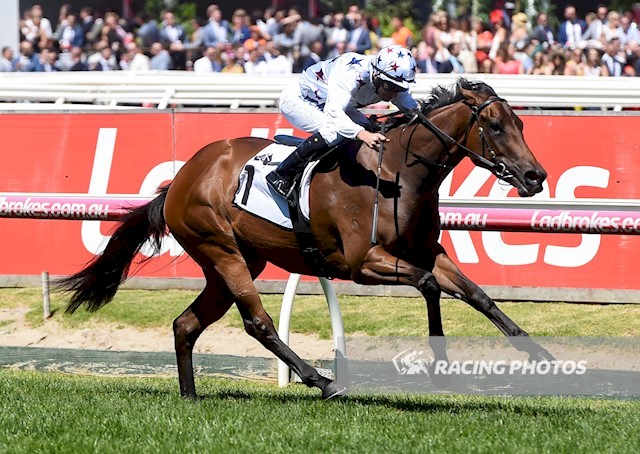 The flying three-year-old, a well backed $2.20 favourite, took her career record to seven wins from 10 starts with a trademark front-running performance under Luke Currie, holding out Humma Humma ($10) by 1-1/4 lengths with Meryl ($4.80) a similar margin away third.

Trainer Tony McEvoy said he favoured running Sunlight against the older horses in the Group 1 Manikato Stakes (1200m) at Moonee Valley at her next run after his original intention was to head straight to the Group 1 Coolmore Stud Stakes at Flemington on November 3.

“The 1200 metres down the straight at Flemington makes speed vulnerable I believe whereas 1200 metres at the Valley is a speed track and she is a speedy filly,” McEvoy said.

“I think with 51 kilos on her back that’s what I’d be leaning towards.

“The horses in that race will be running on a heavy track (in The Everest) up in Sydney today and I won the Manikato last year (Hey Doc) and I’d like to win it again.”

A spiked temperature in Sydney in the lead-up to last month’s Golden Rose had the potential to curtail Sunlight’s spring campaign.

McEvoy revealed a lesson learned from Colin Hayes in his days working with the Hall Of Fame trainer stuck in his mind.

“I took the Colin Hayes view on temperatures,” he said.

“One day of temperature is one week of easy and she only had a temp for one day.

“I remembered it, did it, and I made up my mind if she didn’t bounce I’d turn her out, but she bounced and here she is.

“She’s a high-quality filly with a great constitution that loves to be trained and I love training her.”