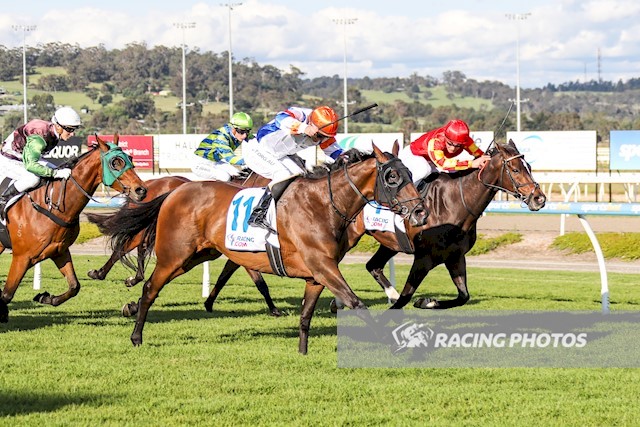 Rebel Romance finally broke through for his maiden win at Pakenham Park on Thursday, November 14, but it wasn’t easy.

Given a perfect ride by Luke Currie, Rebel Romance looked set for a comfortable win past the 200m mark but had to withstand a late challenge before winning the Racing.Com Maiden (2000m).

A red hot $1.75 favourite, the four-year-old mare, trained by Tony & Calvin McEvoy, had just a head to spare beating Fioritura ($6) with Compulsive ($21), a length away third.

Trainer Tony McEvoy said the mare had him a little confused.

“On her breeding, she should get 2400 metres, but there is a train of thought that maybe she struggles past 1600 metres,” McEvoy said.

“Tonight, she was going to win well but then had to dig deep when challenged late.

“We do think the best way to ride her is off the pace and work into the race.

“Even tonight she was closer than we would have liked but there was no speed in the race, so Luke rode her well.

“I will think it through before working out which way we go with her.

“One thing, even though her record is okay, she still has yet to truly produce on race day what we have seen at home.

“She works really well but has yet to show it in a race.”

“She was good,” Currie said.

“It was a fairly muddling run race which it always looked like it would be on paper.

“It probably didn’t show the best of her.

“I think she is better over a tempo where she can relax and come into the race from off them.

“Tonight, she probably did the work for them around her.

“She hung on; the second horse had good form last time so there’s better races in her for sure.

“She is still learning her trade.

“We’ve only just figured she probably likes to be ridden off back last off the speed.

“She is still a work in progress, but she is getting there.”