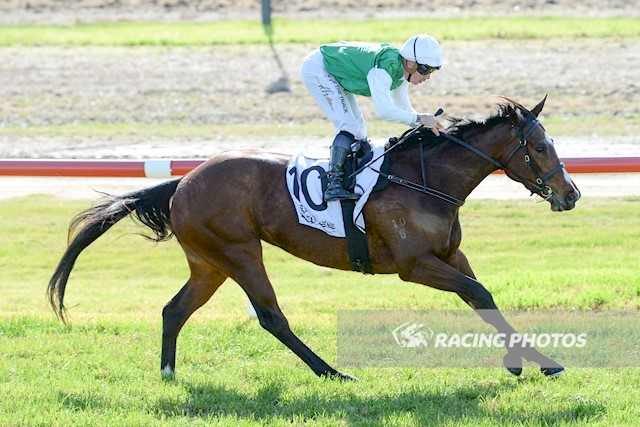 Promising middle distance filly Pontificate lived up to her name with a dominant maiden win at Warracknabeal on Monday, July 25.

While it took five runs for Pontificate to break through, she certainly looks to have a promising future as she matures for trainers Tony & Calvin McEvoy.

Ridden by Dean Holland, Pontificate settled on the fence directly behind the leader in the early stages with a number of other runners going forward out wide to try and take up a prominent position.

Turning for home, Holland was able to bring the three-year-old off the inside and after a short tussle with the leader, drew away to win easily.

By former star stayer Dundeel, Pontificate has always shown talent but has taken time to find her form and now looks on the way to a good future.

Tim Hanley, stable foreman for the McEvoys, had been confident of a breakthrough win by Pontificate.

“It was pretty painless,” Hanley said.

“Dean (Holland) just summed it up perfectly, used the gate to his advantage.

“There was plenty of pressure out wide and he let the speed go.

“I’m not sure if he walked the track today but he was never going to the outside today.

“Tony & Calvin were pretty happy to knock over the maiden today, and I’m not sure how much further she will get into the prep.

“Today might just about see her out but she has done an enormous job.

“I would like to thank the owners who have been so patient with her. She has taken a long time to get to this stage, so good on them.”

“She has got good early tactical speed, but I think she likes to be ridden like she was today,” Holland said.

“Just off them, then use that good turn of foot that she has got.

“Last time we drew really wide, it was either sit really wide midfield three wide with no cover or go just go back and give her a chance to finish off.

“She did finish off really well last time, so the writing was on the wall for today.

“From a good gate we were able to hold our spot early, and the rest is history.

“I think she will eventually run 2000 metres.

“She is very relaxed, and you put her wherever, and she has got a nice turn of foot.”