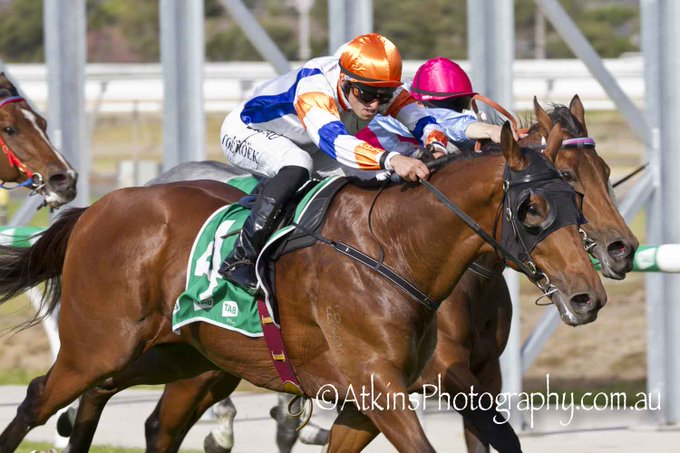 The father and son training partnership of Tony and Calvin McEvoy celebrated their 100th win when Game Keeper scored in brilliant fashion at Morphettville Parks on Saturday, March 28.

The win gave the McEvoys a Morphettville Parks double as Intrigue won earlier in the day.

The duo began their association in September last year and have regularly had a steam of wins.

Game Keeper ($13) was beautifully ridden by Jake Toeroek to emerge from midfield and score an impressive win in the Terry Howe Printing Benchmark 64 Handicap (1250m) beating La Vita ($6.50) by three-quarters of a length with Ambidazzle (($3.20 fav) a length away third.

The three-year-old settled midfield but Toeroek let him improve to be just behind the leaders turning for home.

He obtained a run past the 200m and Game Keeper quickly raced clear to win.

The McEvoys are having a good run with Toeroek and this was his third recent win for the stable from limited bookings.

“I was extremely happy to see him break through with the blinkers on again,” Cornell said.

“We’ve always known he has had a lot of talent and Tony ran him in the Blue Diamond as a two-year-old.

“To warrant a run in a race like that indicates the opinion we have had of him.

“He picked up really well in the home straight when the gap opened.

“We were quietly confident today as he had an approval jump out at Gawler last week and he was very good with the blinkers on.

“Jake is riding really well and doing what Tony and Calvin are asking and we are getting the results, that’s good.”

Winning jockey Jake Toeroek said it was good to be riding winners for the training partnership.

“It is great to be getting some opportunities from a big stable such as Tony and Calvin,” Toeroek said.

“I started my apprenticeship with them, but it has been a while since I’ve had a run with them.

“It is good to be getting these winners up for them.

“Game Keeper cruised up to them really well today.

“I went past Todd (La Vita) that quick it felt like he was standing still.

“When he hit the front he pricked his ears a bit so he is still learning his trade and he will improve off that.

“He’s a big strong horse that gave me a good feel going around to the gates.

“He feels like a horse that will go on with it. In his right races, he will keep winning.”