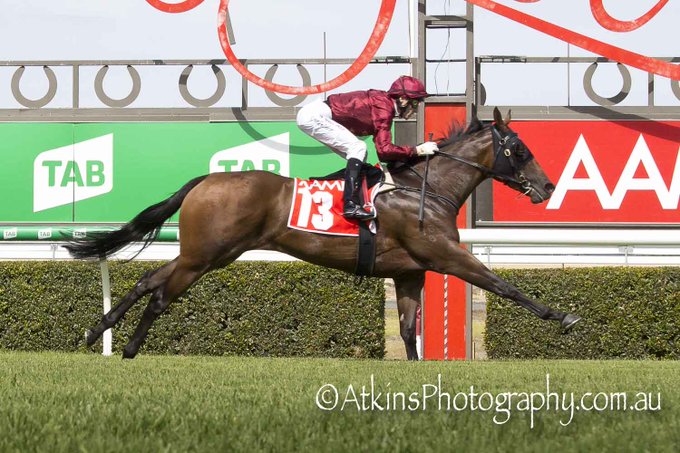 Talented filly Intrigue, trained by Tony & Calvin McEvoy, broke through for her maiden victory in dominant style at Morphettville Parks on Saturday, March 28.

Well backed at $2.70, Intrigue showed good speed from a middle draw to sit handy before drawing clear to score a 1-1/2 length win in the Holdfast Insurance Plate (1300m) from Skilled Wizard ($2.50 fav) with Allayez ($41) a head away third.

Jockey Jason Holder had the three-year-old filly away quickly and was happy to sit second outside the leader and dictate the tempo before going for home at the 300m mark and winning comfortably.

The daughter of top stallion Deep Field cost $300,000 as a yearling and was purchased in partnership by Qatar Bloodstock, managed by David Redvers, and McEvoy Mitchell Racing.

Intrigue was placed at her first four starts before breaking through today and definitely looks an improver.

“She deserved the win,” Cornell said.

“When she ran second the other day I don’t think she saw the horse coming through on the inside.

“We expected her to be hard to beat today.

“Tony did the speed maps and was adamant Jason (Holder) should be in the first three so he gets it right again.

“There is a little bit of upside to this filly as she is still learning.

“There should definitely be a nice race for her at the upcoming Adelaide carnival.

“She is certainly better than today’s grade.”

“The instructions were to be positive early, that was our plan A,” Holder said.

“If she didn’t jump well to go to Plan B but she jumped beautifully, and we found a good spot early.

“On the corner I thought they would need to be good to beat me.

“They didn’t go hard early and that is why I let her improve a bit earlier than I wanted to.

“I knew they were going to sprint from well back so I thought if I could get her sprinting the last 200 metres, she would be hard to beat.