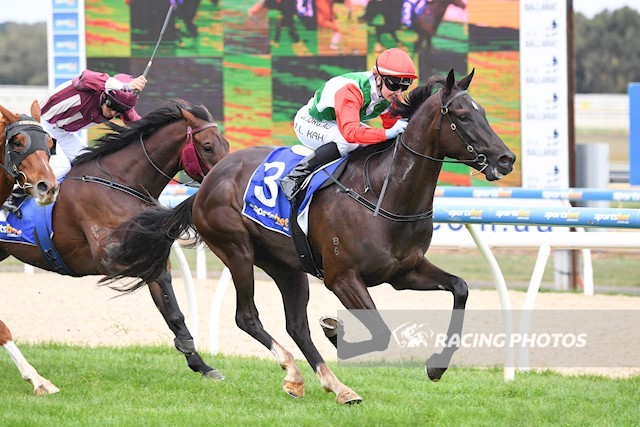 First starter Eluding proved too elusive for his rivals with an impressive debut win at Ballarat on Tuesday, April 6.

Trainers Tony and Calvin McEvoy have high hopes for the three-year-old gelding by boom stallion Toronado and placed him to perfection for his racetrack debut.

They chose the 1400 metre The Haymarket Ballarat Maiden as a perfect kick off but were a little concerned when the track was a heavy 10 but decided to go racing and it proved a winning decision.

Ridden by Jamie Kah, Eluding drifted in betting from $1.60 to start a $2.25 favourite but was well placed throughout before drawing clear to win by 1-1/4 lengths from Rising Archie ($3.10) with Kwahadi ($10) a half-length away third.

Kah had the gelding away well and was happy to settle outside the leader on settling down and had him in a good rhythm.

Approaching the home turn the runner-up loomed up three wide to challenge but Kah kept her mount balanced before asking him to extend over the final 200 metres and Eluding drew clear to win easily and mark himself as a horse to follow.

Victorian stable foreman Michael Shepherdson was impressed by the win.

“He had to show good tenacity today,” Shepherdson said.

“Tony and Calvin have been patient with him.

“It probably wasn’t ideal on a heavy 10 first time out but we to just give him a nice experience over the 1400 metres where he could travel.

“A bit of pressure came on outside of him before the corner, so he really had to be tough late.”

“She has got great hands, Jamie, and we love having her on board.

“You know she is not going to give the horses too hard a run.

“She just lets them find their feet and a rhythm and gives them every opportunity to finish off their race strong.”

Shepherdson said he believed the gelding would run a good 1600 metres.

“With his attitude and physique he is probably going to be a miler.

“The stallion Toronado is doing a really good job and we are pretty excited to having Eluding in the stable and he will win better races than he did today.”