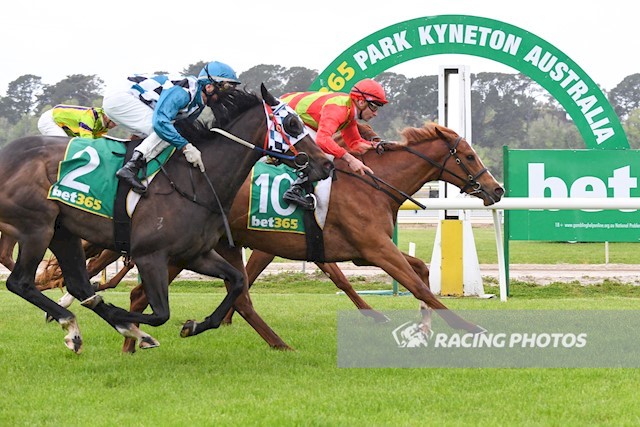 The success of trainers Tony & Calvin McEvoy with the progeny of stakes mare Pane In The Glass continued with Madame Louvre’s win at Kyneton on Friday, November 12.

Madame Louvre is the fourth of the progeny of Pane In The Glass to win for the McEvoys with the highly talented Xilong, Got The Style and Roomooz being the other victors.

The filly had two runs early in the year including a second at Terang before finding her to the McEvoy stables at Ballarat.

At Kyneton, Madame Louvre began nicely on the heavy 8 rated track and settled just behind the leaders in the run to the home turn.

Spain pulled her wide turning for home and the filly found the front and held on to win well.

Finn McCarthy, stable foreman for Tony & Calvin McEvoy, said he had been confident in the run.

“It was great to get a win with her, especially with her breeding,” McCarthy said.

“It probably makes her worth quite a bit more now.

“I was pretty happy watching the race.

“She came around them and was too good, thankfully.”

McCarthy said Madame Louvre would be all the better for her first run back from a break.

“She had two jump outs before today but no doubt there would be room for improvement.

“Obviously the testing conditions out there took its toll at the end.

“Hopefully, she can go on with it now.”

“It was a really good training performance by Tony and Calvin,” Spain said.

“They had her here today spot on, I was glad to get the call up and the job done.

“It worked out perfect today.

“I wanted to ride her a bit closer from the draw on this heavy track.

“She bounced really well and got into a beautiful spot.

“I popped off three wide with cover to give her the opportunity to have room when I needed it.

“To her credit, she was probably out of carrots that last 100 but she fought on and dug deep.

“She is going to be a lot better on top of the ground as well.

“She travelled okay in it (heavy ground), I thought she quickened up nice but was all out that last 100, however she dug deep.”