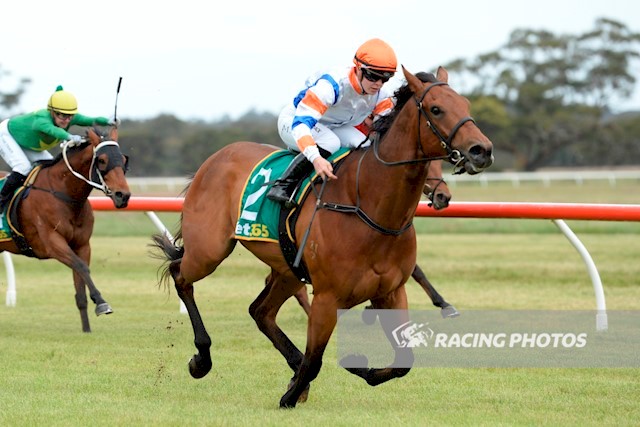 Heavily backed Bill The Boxer produced a knockout blow to his rivals on race debut at Dunkeld on Saturday, November 13.

Ridden by apprentice Madison Lloyd, the four-year-old had a length advantage on the line from Princess Pancakes ($3.30) with Allgo ($12), 2-1/4 lengths away third.

The gelding began well from his gate six draw but didn’t have enough pace to cross and two of his rivals kicked up on his inside.

Lloyd was happy to sit three wide on Bill The Boxer and keep him balanced on the testing track.

Turning for home she allowed him to move up to the leaders and Bill The Boxer quickly put several lengths on his opponents.

In the straight, the gelding looked uncomfortable in the going and appeared to dip a few times but had enough in hand to win nicely.

Trainer Tony McEvoy said there would be big celebrations by the family of his business partner Wayne Mitchell, who owns Bill The Boxer.

“The horse is named after Wayne’s grandson, Bill,” McEvoy said.

“Wayne was visiting his daughter Kristen, and young Bill was doing some boxing, and he thought Bill The Boxer was the perfect name for the horse.

“Early on the horse showed nice ability and we hoped to get him to the track, but he was too immature.

“Disappointingly, he since has had knee and suspensory issues, which meant he wasn’t able to get to the track until today.”

McEvoy said he was not surprised with the heavy backing for Bill The Boxer.

“He had trialled well in the leadup to his debut today,” McEvoy said.

“This was our first venture by the stable to Dunkeld, so it was great to land a winner.

“I’m sure he wasn’t comfortable on the heavy track, so I will be keen to catch up with Madison for her assessment.

“Calvin and I will look to place him to advantage but eventually I hope he can measure up to at least Adelaide city company.”