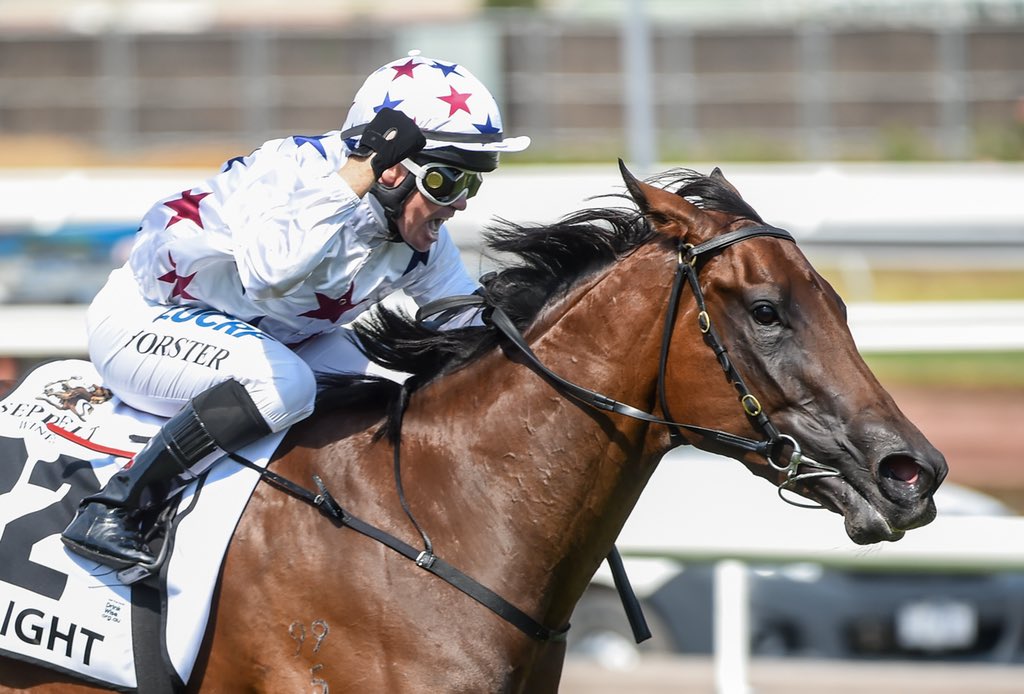 Trainer Tony McEvoy’s champion three-year-old filly Sunlight added a second Group 1 victory to her resume with an all the way win in the $1.25 million Seppelt Wines Newmarket Handicap (1200m) at Flemington on Saturday, March 9.

She became the first three-year-old filly to claim Newmarket since Alinghi in 2005,

Sunlight flew the start and led throughout to prove too strong for a star-studded field for a second Group 1 following a win in the Coolmore over the same track and trip last spring.

It is now onwards and upwards for Sunlight and she is likely to head to Sydney for the Group I T J Smith Stakes at Randwick on April 6.

McEvoy is already talking of “the tall race” (The Everest in October) for Sunlight – but Saturday was all about lapping up the moment of another Group I win.

A trip to Adelaide this autumn for races like the G1 Sangster Stakes and G1 Goodwood seems now likely to be overlooked in preference for a shot at the richest sprint in Australia – the $2.5 million T J Smith Stakes.

“She keeps stepping up to the plate,” a proud McEvoy said. “The further she gets into her prep, the better she gets.

“I know she only had 50.5 kilograms, but she is a three-year-old filly and they were touting it to be one of the best fields and she’s proven to be a star before today and confirmed it today.

“What an amazing ride she’s given us.”

From just 14 starts, Sunlight has now returned $3.8m in prizemoney.

Vorster has ridden in over 6000 races and claimed four previous Group 1s, but this was a huge moment early in his time on Australian soil, where he has signed up to be McEvoy’s Adelaide-based stable jockey.

He was associated with champion sprinter Rocket Man in Singapore – but this was just his third ride on Aussie soil.

“That’s some start for Barend, he’s going to be good in Adelaide,” McEvoy said.

“When he read that Jamie Kah and I were splitting he was the first to apply. I couldn’t spell his name for a start.

“We walked this track for two hours yesterday and we had a plan to come to the outside, we just couldn’t quite get there, there was a horse just on his heels and he couldn’t get right out there.

“He didn’t panic and he showed his experience and the filly rallied.

“For Barend to come here and handle an occasion like today is great, but he’s 41, he’s not a new kid on the block.”

Vorster told how his Group 1 Aussie dreams had been quickly realised after deciding he needed a change from riding in Singapore.

“I just knew I needed a change and Tony was a good trainer,” Vorster said.

“Australia is my new home now and what a way to start.

“There were never horses right alongside me, so she really relaxed beautifully.

“I just let her slide along and when I gave her a few reminders she just really quickened away.

. “She’s got some sort of motor this filly. She was a joy to ride.”

Latest News
Share
Three in a row for Rockarral Previous
Welcome to SA Mr. Vorster Next