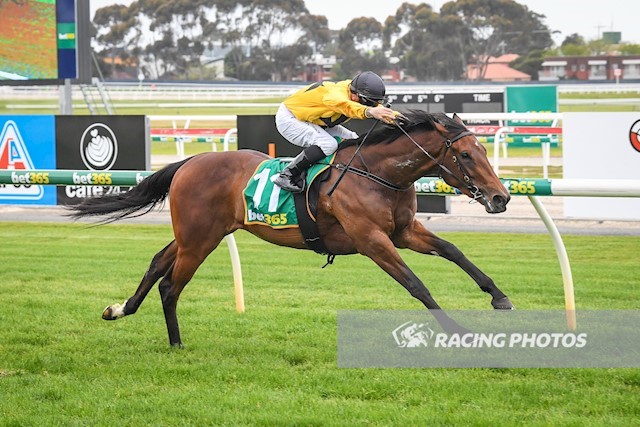 Lightly raced three-year-old filly Star of Chaos, trained by Tony & Calvin McEvoy, gave her rivals something to chase at Geelong on Wednesday, September 29.

When the judge called a halt to the DMB Contracting Class 1 Handicap (1343m) they couldn’t catch the daughter of champion stallion Zoustar.

The filly found the front easily and Holland rated her perfectly to land the win.

Trainer Calvin McEvoy said it had been the plan to lead.

“She just bombed the start at her last run,” McEvoy said. “And it sounded like it was a pretty hot race as well.

“Dean (Holland) had confidence, he won the maiden on her.

“We wanted to be positive and work it out, and he did that, and she ended up leading.

“He slackened the tempo, and it was a really nice watch.

“She was certainly on empty late.

“Star of Chaos is not an overbig filly but very athletic.

“Her work had been good, and she won her maiden impressively and we were a little dumbfounded after her last run, but it was nice to see her bounce back for a good ownership group.”

McEvoy said he hope Star of Chaos might take some improvement out of the win and the stable would look for another suitable race.

“She is a nice filly going forward.”

“Having a bit of luck with the McEvoy team at the moment,” Holland said.

“Done plenty of work there over the winter and the rides are still coming so I’m very fortunate.

“We led at her first start back, jumped and balanced and really appreciated rolling along.

“She was in a bit of a mood the other day, I didn’t ride her, she seemed to miss the start and I thought it was a pretty good race.

“She jumped straight to the front today, pricked the ears and I had it very easy.

“I let her slide from the 600 (metres), without using her sprint, then quickened from the 400 and she was just too good.

“I think she probably had enough by the end but at these sorts of distances, if you draw a barrier, it is a bit easier to land behind the speed.

“I think she would run it out strong with a sit, so there is a bit of upside there.