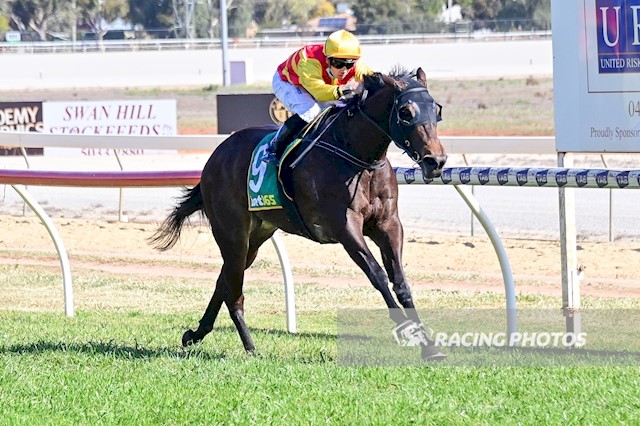 It was perfect vision for promising mare Spectacle at Swan Hill on Monday, September 27.

The victory made it a good four days for trainers Tony & Calvin McEvoy who had prepared five winners.

Resuming from a spell in the Bet365 Racing Refunds Maiden (1300m), Spectacle led throughout to score a strong win.

Ridden by Dean Holland, the four-year-old mare ($2.50) worked her way to the front then dashed away in home straight.

Whatafox ($1.90 fav) made a late charge but could only get to within three-quarters of a length while Capito ($31) was 3-1/4 lengths away third.

Tim Hanley, stable foreman for McEvoy Mitchell Racing, said Spectacle would be improved by the win.

“Coming to Swan Hill we expected to probably find a bit of an easier race,” Hanley said.

“But we bumped into another pretty handy one – it definitely looked a race in two and it panned out that way.

“Dean (Holland) made his own luck; it probably wasn’t ideal going to the front but further down the track I think she will be better taking a sit.

“But he got away with it today making his own luck.”

Hanley said Spectacle would be even better suited over more ground.

“She has always been a filly looking for a bit of ground and has been out to 2000 metres.

“I think being a bit stronger and more mature she can definitely get out to a further trip this preparation.”

Winning jockey Dean Holland said it had not been the plan to lead but had worked out well.

“She was fit enough but there is plenty of improvement there.

“She jumped good, and I really didn’t have any other option than to finish up in front.

“It didn’t bother me because I had the favourite directly behind me.

“I was able to make my own luck and fortunately the horse was good enough, and fit enough, to kick away and did it very easy in the end.

“She is going to be better following a horse or two going forward but it good to get the monkey off her back in a maiden.

“I think she will settle and will go to better races, that’s for sure.”

Spectacle now has a win and three placings from seven starts and was stakes-placed last preparation in Adelaide.